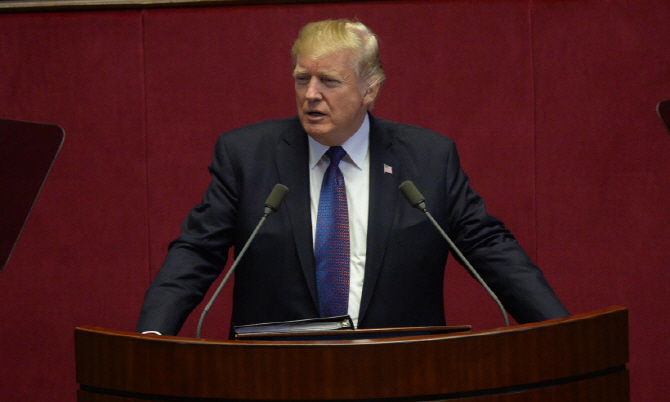 SEOUL, Oct. 11 (Korea Bizwire) — A controversy has erupted in South Korea over U.S. President Donald Trump’s choice of words in a comment regarding South Korea’s sanctions on North Korea.

Trump was responding to a reporter’s question about reports from Seoul that South Korea is considering lifting some sanctions against North Korea.

The reporter was apparently referring to South Korean Foreign Minister Kang Kyung-wha’s remarks a day earlier that her government is reviewing whether to lift the bilateral sanctions that were put in place to punish the North for a deadly torpedo attack on a South Korean naval ship in 2010.

At a parliamentary session in Seoul, Kang later watered down her statement, saying there are no full-fledged moves under way to remove the May 24 Measures.

Nonetheless, Trump’s use of the word “approval” raised the eyebrows of Koreans for its negative connotations in country-to-country relations.

“I think it’s not appropriate to comment on President Trump’s remarks,” the ministry’s spokesman, Noh Kyu-duk, said at a press briefing.

Speaking privately, however, a ministry official questioned if Trump had been aware of the overall context of Kang’s comments.

“He seems to have repeated his basic position on sanctions on North Korea,” rather than specifically on the May 24 Measures, he said.

There’s a view, the official added, that the president was also emphasizing the importance of consultations between the allies.

Even so, for many people here whose mother language is not English, Trump’s use of the word “approval” is controversial. They regarded it being tantamount to “permission,” which suggests an unequal relationship.

An English native speaker working in Seoul pointed out that there may be various ways to interpret the wording.

“Approval is more neutral in meaning. Trump probably means something closer to ‘agreement’ given friendly relations between the two sides, but the U.S. President doesn’t always speak precisely,” he said.

The ministry’s spokesman, reaffirmed Seoul’s commitment to maintaining sanctions on Pyongyang until there’s an “assurance” of its complete denuclearization.