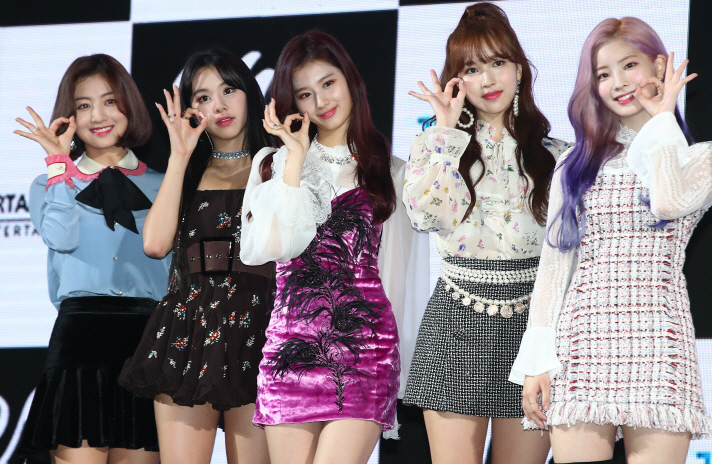 Members of TWICE pose for photos during a media showcase for the group’s sixth EP, “Yes or Yes,” at KBS Arena in western Seoul on Nov. 5, 2018. (image: Yonhap)

BTS, the boy band that topped the Billboard 200, was initially considered as another possible guest on the show, but was removed from consideration after one of its members, Jimin, was found to have worn a controversial T-shirt depicting an atomic bomb explosion.

NHK unveiled the profiles of celebrities confirmed to appear on Kohaku Uta Gassen via its website yesterday.

The 69th Kohaku Uta Gassen, which airs every year in Japan on the last day of the year, will feature such popular artists as Yoshiki from X-Japan, AKB48, Seiko Matsuda, Nogizaka46 and scores of other leading performers.

TWICE is the only Korean singer or band included on this year’s list, and the first K-pop girl band to clinch a second consecutive appearance.

The decision by NHK to include Twice is raising eyebrows as it comes after a recent Seoul court ruling that ordered Japan’s Nippon Steel & Sumitomo Metal Corp. to pay damages to four victims of forced labor during Japanese colonial rule.

The ruling has sparked great controversy in Japan, straining diplomatic ties between the two countries. Despite the controversy, NHK’s decision signifies that TWICE’s position in Japan has remained unchanged.

TWICE’s most recent mini album titled “Yes or Yes,” which was also released in Korea last week, topped Japan’s Oricon Weekly Album Chart, marking the first time that the group has reached the top of the Japanese charts with an album released in the Korean language.

In addition, TWICE is slated to take on a “dome” tour in Japan next year, a first for a K-pop girl band. The tour will include performances at Tokyo Dome, Nagoya Dome, and the Osaka Dome.

One K-pop expert said that three of the members belonging to the band are Japanese, which can explain why the sentiment for Twice is more favorable compared to the stronger sentiments of disapproval expressed towards other K-pop stars.