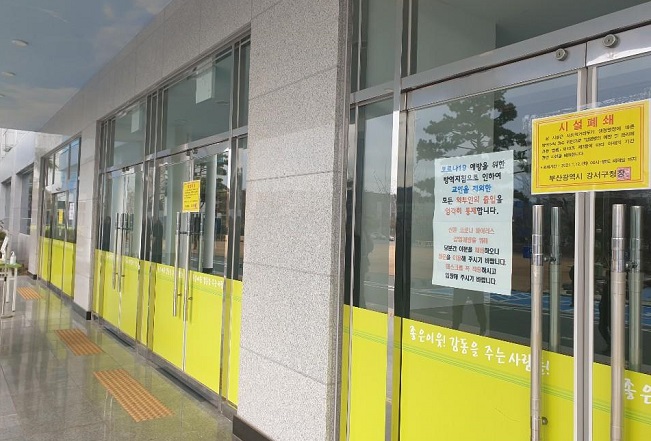 This photo, provided by Gangseo Ward Office of Busan on Jan. 11, 2021, shows the facility shut-down order posted on the doors of Saegyero Church, which violated an order banning in-person worship services under stronger social distancing measure.

Under the administrative orders by Busan’s ward offices, the two Protestant churches — Saegyero and Seobu — have been forced to shut down for defying the antivirus distancing measures.

Busan has been under the second-strongest social distancing scheme of Level 2.5 since Dec. 15, under which churches across the city are prohibited from on-site worship services and required to replace them with online ones.

Saegyero was initially ordered by ward officials on Sunday to stop in-person services, right after hosting a Sunday service attended by 1,090 people.

But the church defied the initial order and pushed ahead with an early-morning service again Monday, resulting in the shut-down order. About 200 people attended the latest service.

The church has been reported to the police for holding in-person services on six occasions amid the spread of COVID-19.

Seobu, meanwhile, has been ordered to shut down starting Tuesday for convening an on-site worship service the previous day, in which around 500 people assembled.

The authority said the measure will be in place until further notice from the ward office.

The church was also told to stop in-person services last week but went ahead with the Sunday ritual in defiance, although it has been reported to the police for social distancing violations on nine occasions previously.

Protesting the punitive action, Saegyero Church filed for a court injunction to fight the shutdown order.

An association of Protestant churches nationwide, which represents Saegyero, said in a press conference “the shutdown order goes against the broad principle of religious freedom and equality mandated by the Constitution.”