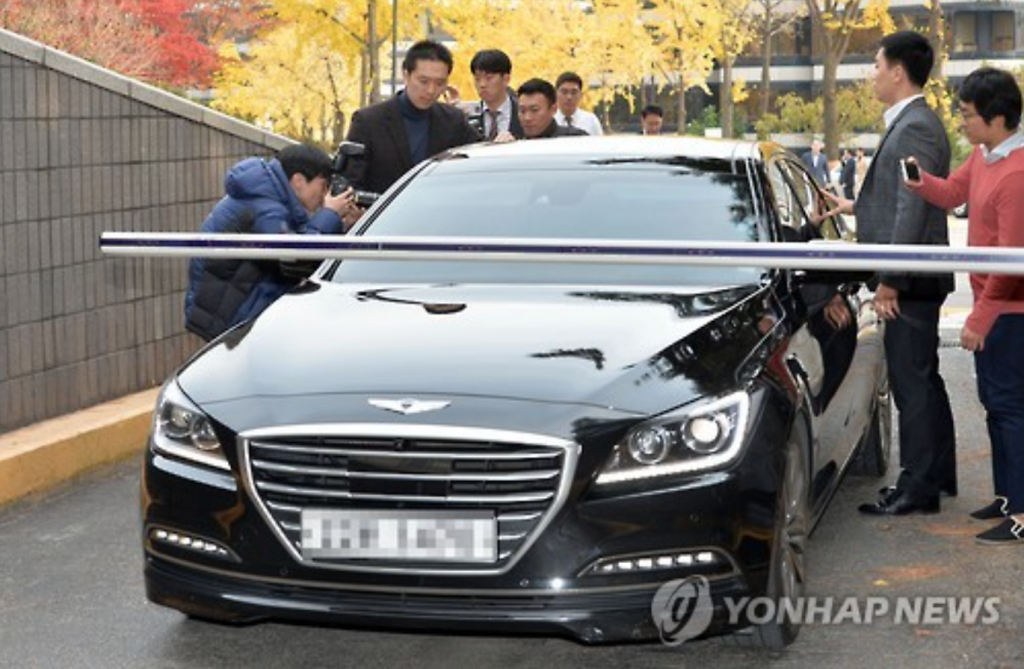 A sedan believed to be carrying a conglomerate chairman enters the parking lot of the Seoul Central District Prosecutors’ Office in southern Seoul on Nov. 13, 2016. (image: Yonhap)

The sources said the special prosecution team investigating the corruption and influence-peddling scandal surrounding Choi called in and questioned Lee, the heir apparent of Samsung Group; LG Group Chairman Koo Bon-moo and CJ Group Chairman Sohn Kyung-shik on Sunday for questioning about their separate one-on-one meetings with the president in Seoul in July last year, which led to their groups’ massive donations to the two foundations later.

Hyundai Motor Chairman Chung Mong-koo, Hanwha Group Chairman Kim Seung-youn and SK SUPEX Council Chairman Kim Chang-geun underwent questioning at the Seoul Central District Prosecutors’ Office between Saturday afternoon and Sunday morning, the sources said without elaborating. SK Group Chairman Chey Tae-won did not have a private meeting with the president but appeared before prosecutors for questioning as chief of his company.

Prosecutors reportedly questioned the leaders of Samsung, Hyundai Motor, LG, CJ, Hanwha and SK groups to find out how their one-on-one meetings were arranged after their collective meeting with the president at Cheong Wa Dae on July 24 last year and what was discussed at the meetings.

At the group meeting held over lunch, Park called on 17 local conglomerate leaders to extend support to the creation of the Mir and K-Sports foundations set up to promote Korean culture and sports abroad.

Park reportedly met separately with seven of them the following day at Cheong Wa Dae and other locations.

In a related development, meanwhile, Hanjin Group Chairman Cho Yang-ho was summoned Sunday to be questioned on whether he quit against his will as president of the PyeongChang Organizing Committee for 2018 Olympic and Paralympic Winter Games (POCOG) in March.

Allegations have it that Cho was forced to quit as he refused to cooperate with Choi in placing a 150 billion won construction order with a Switzerland company to build an Olympic facility. The Swiss firm, which reportedly had a partnership agreement with Choi, failed to win the project due to opposition from Cho.

In the massive corruption scandal, Choi allegedly used her four-decades-long relationship with Park to coerce local businesses into donating large sums to the two dubious organizations that she was suspected of using for personal gain. On Nov. 3, Choi was formally put under arrest on charges of fraud and abuse of power.

Despite two public apologies by the president since the scandal erupted last month, her approval rating plunged to a record-low 5 percent, according to local pollster Gallup Korea.

On Saturday, over 1 million people took to the streets in central Seoul to demand Park’s resignation over the growing scandal.