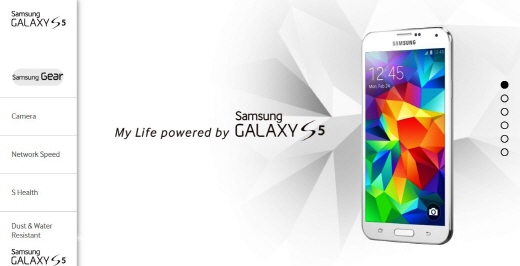 The web-based experience center is offered in three languages including Chinese and English (British), as well as in Korean. (image:U Pleat)

SEOUL, June 7 (Korea Bizwire) – U Pleat, a web design firm, said on June 5 that it recently launched a web- and mobile app-based experience centers for the Galaxy S5 in which users can “touch” and try new features of the latest smartphone model. The web experience center (http://bit.ly/1nZBfTr) was designed in ways for users to get familiar with the phone model as much as possible.

As for the mobile app, it makes use of the “key visual” slider that can show the product in a 360-degree view in its “Design” section. In addition, there are other sections in the mobile app center including “Features” (section that allows the user to view new features in 5 different themes), “Wearable Device” (section that offers information on wearable devices such as the Gear Fit and Gear 2), and “Accessories.”

A U Pleat official said, “These web and mobile experience centers are totally different from the Galaxy S5 site in Korea. For the Galaxy S5 and some accessories, a click of the ‘Buy Now’ button can take you directly to the online store where you can purchase the items.”

U Pleat is a professional digital agency that focuses on user experience design and unified brand marketing by creating and maintaining web and mobile sites. The company has had experiences in creating a variety of financial services industry customers such as KB Kookmin Bank, Woori Bank, and Citibank.