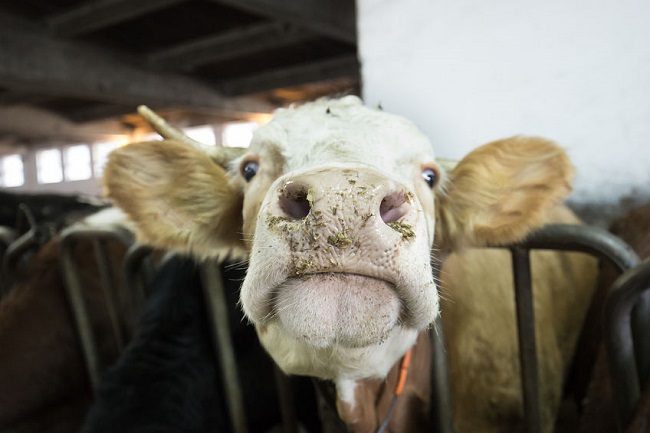 FDA has kept tight controls on the ingredients of cattle feed since 1997. It banned any mammalian proteins from being mixed into cattle feed, and expanded upon the regulations in 2009, when it included dangerous industrial chemicals under the ban.(Image:Kobiz Media)

SEOUL, Jul. 20 (Korea Bizwire) — In response to the discovery of an animal believed to be infected with mad cow disease, the first discovery in the U.S. in five years, the Ministry of Agriculture, Food and Rural Affairs convened an emergency meeting with related agencies on July 19.

According to the Ministry, the U.S. Department of Agriculture (USDA) informed the South Korean government that an 11 year-old cow from the state of Alabama had contracted bovine spongiform encephalopathy, commonly referred to as mad cow disease.

Mad cow disease is known to have two main strains – classical and atypical.

The classical strain is caused by cattle eating feed that contains ground beef and cattle bones. It can also be cause by cattle feed that has been contaminated in some form. It is a neurodegenerative disease that can cause a cow’s brain and spinal cord to degenerate.

The U.S. Federal Drug Administration (FDA) has kept tight controls on the ingredients of cattle feed since 1997. It banned any mammalian proteins from being mixed into cattle feed, and expanded upon the regulations in 2009, when it included dangerous industrial chemicals under the ban.

When South Korea first instituted its ban on U.S. beef in 2003, the mad cow disease in animals was of the classical strain.

The 11-year-old cow’s disease is classified as atypical. Considering the disease came about through most likely natural causes, the U.S. believes that the World Organization for Animal Health considers the situation to be at low risk of danger.

Including this particular case, since 2003 four out of the total five cases of mad cow disease have been the atypical strain.

The Ministry has reassured the public by saying that beef from Alabama is not imported from the U.S.

Furthermore, the beef imported is from cattle 30 months old or younger, and that only beef that has passed inspection for specified risk material (SRM) by the USDA Food Safety and Inspection Service is imported to South Korea.

In light of the discovery, the attendees of the emergency meeting agreed to expand inspections of all incoming goods from the normal 3 percent to 30 percent. They also agreed to wait for the results of the U.S. inspection before making any other changes.