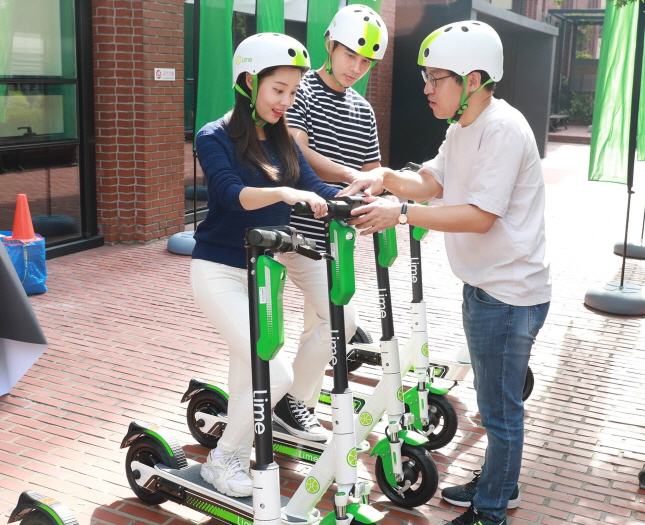 South Korea will be the first Asian market where Lime will introduce its e-scooter sharing platform, Lime Korea said in a statement.

“We (aim to) improve urban accessibility and reduce congestion by connecting people with modern mobility for the first and last mile in South Korea, a dynamic market with significant demand for increasing micro mobility,” Mitchell Price, Lime’s Asia Pacific regional director of government strategy and policy, said in a press conference held in Seoul.

Electric scooters have successfully replaced some of the vehicle demand in markets such as Paris and Berlin.

And Seoul, a very dense and congested city, definitely will be the next good market to accept Lime’s micro urban mobility solutions, the director said.

In Korea, Lime plans to collaborate with the local government and various stakeholders to promote a “sustainable and responsible riding culture,” he said.

Lime plans to start its service with 500 e-scooters in three affluent Gangnam areas — Gangnam Ward, Seocho Ward and Songpa Ward — in southern Seoul and to double the number by the end of this year to serve other areas in the capital city, the statement said.

The “world’s most advanced” Lime Generation 3.0 model will be introduced in Korea, and it can travel up to 40 kilometers on a single charge and reach speeds of up to 22 km per hour, it said.

To secure safety for riders, Lime said it kicked off a program in Korea on Sept. 27 to educate them about safety regulations through the app, email and safety events.

The company has bought policies from global insurers to fully cover accidents or collisions involving Lime riders, the director said.

Lime, established in 2017, currently serves over 120 cities, including Seattle, Los Angeles, Berlin and Paris, in over 30 countries. As of September, Lime has posted 100 million rides globally.