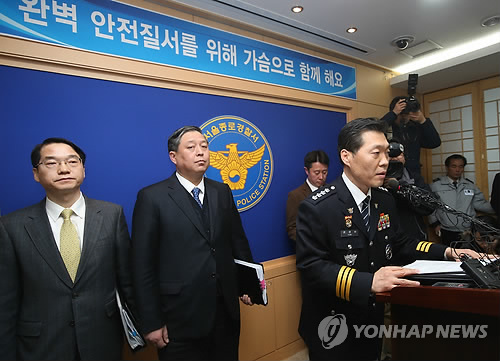 Yoon Myeong-seong, head of the Jongno Police Station, said the authorities were considering arresting the attacker on charges of attempted murder, violence against a foreign envoy and business obstruction. (image: Yonhap)

SEOUL, Mar. 6 (Korea Bizwire) — Police said Friday they are seeking to arrest a South Korean man on attempted murder charges for slashing U.S. Ambassador to Seoul Mark Lippert on the face and wrist in a show of discontent over the ongoing bilateral military drills.

None of the wounds were critical, and Lippert was well on his way to recovery as of Friday morning, according to Yoon Do-heum, head of Severance Hospital where the envoy underwent surgery.

It was the first time a U.S. envoy here has been attacked. Kim was also behind the first-ever assault of a foreign envoy here when he threw a rock at a Japanese ambassador to Seoul in 2010.

Yoon Myeong-seong, head of the Jongno Police Station leading the investigation, said the authorities were considering arresting Kim on charges of attempted murder, violence against a foreign envoy and business obstruction.

Kim had told police officers that he had no intention to kill. But Yoon said the fact his act was premeditated and that he slit Lippert multiples times, including the face, with a 25-centimeter-long knife was enough to show that he at least willfully neglected the possibility.

A preliminary probe has shown that Kim had been to North Korea seven times between 1999 and 2007. He also tried to erect an altar at the heart of Seoul in memory of late North Korean leader Kim Jong-il in December 2011 shortly after he passed away.

Police were already searching Kim’s home and office in the western Seoul district of Seodaemun for documents and hard drives on Friday. They said the items will help them learn how Kim planned for the attack and why. They also intend to illuminate whether he had an accomplice. Police have also been issued a warrant to obtain Kim’s phone records.

Kim had reportedly told officers that he plotted the attack to stop the Key Resolve and Foal Eagle exercises that kicked off earlier this week. The exercises are part of Seoul and Washington’s effort to better deter threats from North Korea. Kim also said he had no accomplices.

Authorities said the U.S. envoy had not been one of the personnel requiring 24-hour guarding. The U.S. Embassy had also not requested bodyguard service, they added.

Lippert, 42, became the youngest-ever U.S. envoy to Seoul last year. His wife gave birth to a son here, to whom they gave a Korean middle name.