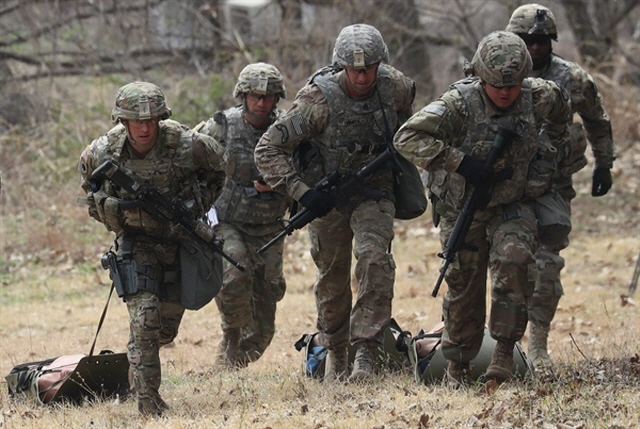 The U.S. Forces Korea had banned its service members from wearing masks except when they have a proven medical condition that requires the use of masks. (Yonhap)

SEOUL, Apr. 2 (Korea Bizwire) — The U.S. military in South Korea has made a policy change to allow its troops to wear filtering masks while in uniform amid growing concerns about air pollution here, an official said Tuesday.

The U.S. Forces Korea (USFK) had banned its service members from wearing masks except when they have a proven medical condition that requires the use of masks.

“Basically before, certain services like the Air Force have approved mask policy, but the Army did not,” the USFK official told Yonhap News Agency over the phone.

“So the USFK commander has established a mask policy for all USFK service members. This is for all soldiers stationed in Korea under the USFK,” the official added.

USFK chief Gen. Robert Abrams has signed his command policy letter that allows the “effective use of filtering masks by service members in uniform in the event of elevated particulate air pollution levels,” the USFK announced in a tweet Monday.

As for background, the command letter noted that from 2015-2017, air pollution levels near U.S. bases in South Korea exceeded U.S. Environmental Protection Agency standards for poor air quality about 100 days each year.

In recent years, the Seoul government has been grappling with worsening air quality, as clouds of fine dust, thought to originate from the western deserts of China and domestic smog, cover the sky with a yellow haze. Fine dust is known to cause various respiratory problems.