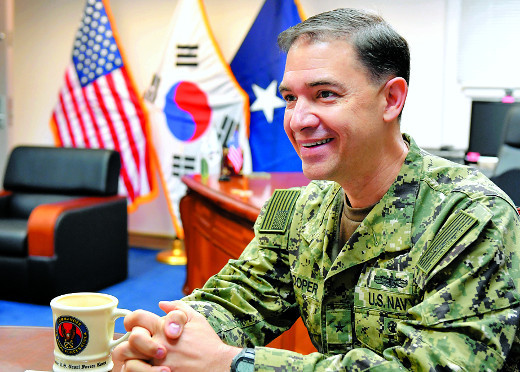 Rear. Adm. Brad Cooper will be formally given the new name — Goo Tae-il — at a joint military band concert to be held in Busan later in the day.

The surname Goo sounds similar to Cooper and it means turtle in the Chinese character, according to the ROK-U.S. Alliance Friendship Association.

The word was chosen to refer to the popular turtle ship made by Yi Sun-shin, a legendary Korean admiral of the 16th century, it added.

The first name, Tae-il, means great or big and the sun as well, said the nonprofit organization.

Cooper began his duty as the leader of U.S. naval forces in Korea in September last year.

“Serving here in Busan shoulder-to-shoulder with our ROK Navy teammates is the privilege of a lifetime. The ROK-U.S. Navy alliance is ironclad,” he said in a statement.
“Today, I am so proud to say that our relationship has never been stronger. I believe that this honor of a Korean name reflects the strength of our great partnership.”

He added, “As we look forward to a bright future together, I hold my new name close to my heart and commit deeply to advancing our great friendship and partnership to new heights!”

He is the first U.S. Naval Forces Korea official to get a Korean name from the association.