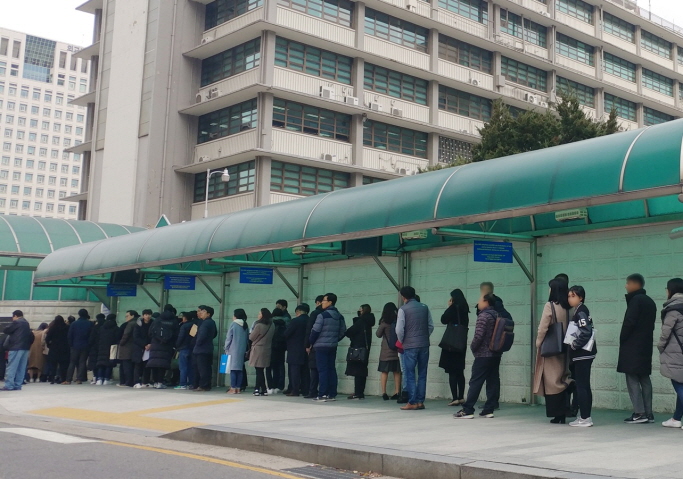 People forming a long queue to apply for a U.S. visa in front of the U.S. Embassy in Seoul on Nov. 29, 2018, ahead of the start of winter vacation season. (Yonhap)

SEOUL, Aug. 6 (Korea Bizwire) — The United States is no longer waiving visas for South Koreans and other foreign nationals with records of a visit to North Korea since March 2011, Seoul’s foreign ministry said Tuesday.

The tightened measure, effective Tuesday (U.S. time), requires them to apply for a U.S. visa in person through the embassy and undergo necessary steps, including an interview.

“It does not mean a travel ban to the U.S. for having visited North Korea. (The applicant) can still enter the country after obtaining a visa that suits the purpose of the visit,” a ministry official said.

About 37,000 South Koreans, who have been to the North at least once since March 1, 2011, are expected to be affected by the new rule, according to ministry sources.

If there is an urgent need for travel, the person can make an “expedited appointment” with the U.S. Embassy in Seoul for a swift process.

Under the visa-free scheme, South Koreans have been given a 90-day permit in the U.S., once they obtained online approval via the Electronics System for Travel Authorization (ESTA), an automated assessment of the individual’s eligibility for travel based on personal information.

But those with records of visiting the North are no longer eligible to use the ESTA.

If the past visit to the North was part of performing public duties, the person is eligible to apply through the ESTA as long as he or she provides proof of documents backing the case.

An official at the unification ministry, which handles inter-Korean affairs, said the U.S. has not asked for a list of people who visited the North during the cited period.

“In case of such a request, we will handle the matter according to our domestic regulations considering the protection of personal information,” the official said.

Tightening the visa process is part of due follow-up procedures in line with Washington’s November 2017 redesignation of North Korea as a state sponsor of terrorism, and it notified Seoul about a month ago of the planned change, the ministry said.

Since 2016, the U.S. has not allowed the entry through the ESTA of foreigners who have visited one of seven countries since 2011: Iran, Iraq, Sudan, Syria, Libya, Yemen and Somalia.

The U.S. offers the ESTA scheme to 38 countries that signed up for the U.S. visa waiver program (VWP), including South Korea, Britain, Germany and France.

The new visa rule will be applied to all of the VWP participating countries.

The foreign ministry said it will bolster administrative support to minimize inconvenience for people subject to the toughened measure.