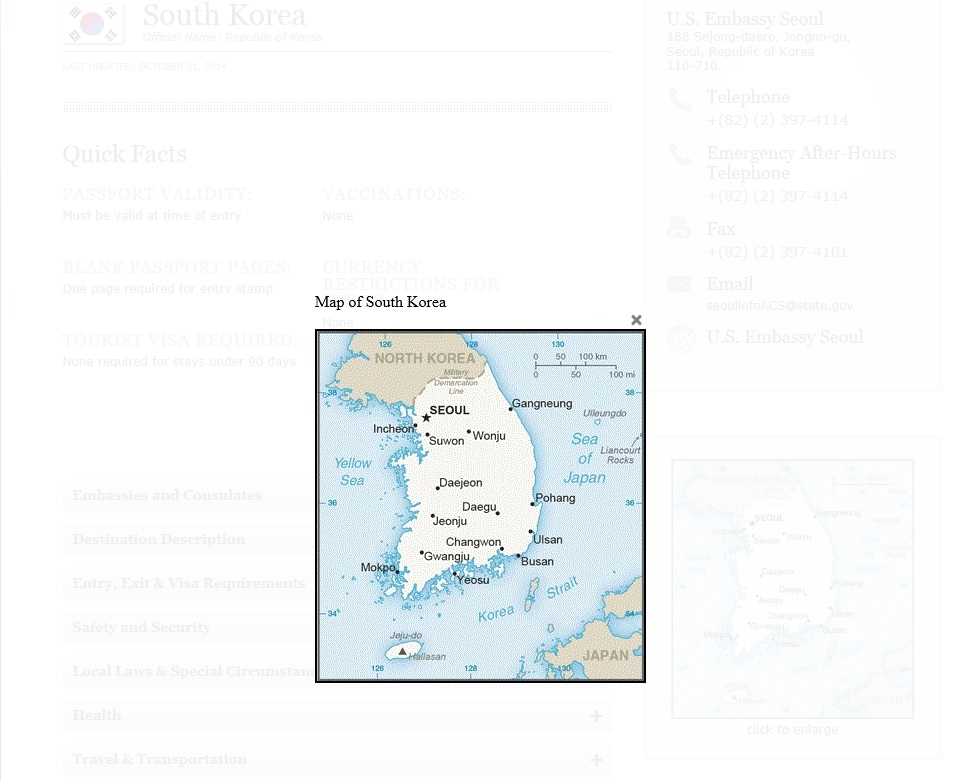 The revised map showed Dokdo marked as the Liancourt Rocks, a neutral name that the U.S. has used to refer to the islets in an effort not to take any side. (image: Screen capture of the US Department of State website)

WASHINGTON, March 16 (Korea Bizwire) — The U.S. State Department revised a map of Korea on its website Monday to include a reference to South Korea’s easternmost islets of Dokdo.

The islets, which Japan has long claimed, had not been marked in the Korea map in the website’s U.S. Passports and International Travel section, while a map of Japan included a reference to the islets. That gave an impression that Dokdo belongs to Japan.

After learning of the omission, South Korea’s foreign ministry asked the U.S. to fix the map.

The revised map showed Dokdo marked as the Liancourt Rocks, a neutral name that the U.S. has used to refer to the islets in an effort not to take any side amid Japan’s territorial claims to the East Sea islets. The name came from a French whaling vessel that sighted the islets in the 19th century.

The State Department still refers to the body of water between the Korean Peninsula and Japan as the Sea of Japan, despite Seoul’s demand that it should be called the East Sea.

In January, the U.S. restored the neutral name of the islets in the CIA’s World Factbook map, a day after removing its usual reference to the islets in its latest edition, saying that it made a technical mistake.

Japan has long laid claim to the islets, but Seoul has rejected Japan’s claim as nonsense as it regained its independence from Japan’s 1910-45 colonial rule and reclaimed sovereignty over its territory, including Dokdo.