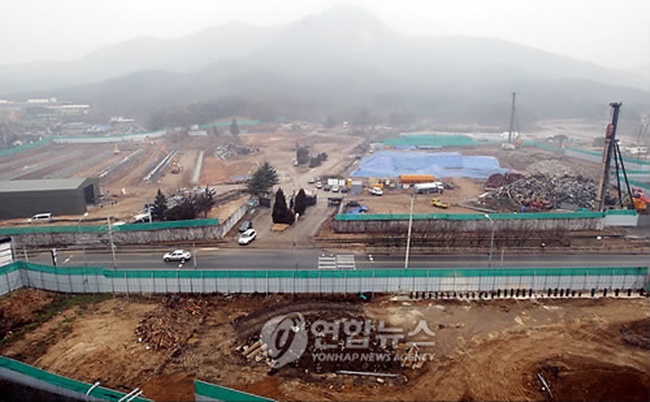 The site of former U.S. military base Camp Sears in Uijeongbu, north of Seoul (Image: Yonhap)

UIJEONGBU, South Korea, April 17 (Korea Bizwire) – The city government of Uijeongbu, north of Seoul, has demanded the defense ministry conduct an examination into soil contamination at a former U.S. military base site in the city, officials said Tuesday.

The Uijeongbu city government bought the former Camp Sears site from the defense ministry in 2012 after the land was returned to the ministry in 2007 under a base consolidation and relocation plan, known as the Land Partnership Program (LPP).

Nine oil tanks had existed on the base to supply oil to other American bases north of Seoul. When the site was returned, most of the land was contaminated, with total petroleum hydrocarbon (TPH) levels up to 73 times the maximum permissible levels.

The ministry commissioned the Korea Environment Corporation to clean up the site from 2009 and 2012 before the Uijeongbu city government purchased the land as part of a project to establish an administrative complex housing public and government agencies.

Last month, the city broke ground at the site to build a fire department headquarters.

But the construction was halted recently as oil residue was found atthe site. Tests were conducted on samples taken from four locations at the site, and two of them had TPH levels of 836 mg per kilogram and 585 mg/kg, which is higher than the permissible 500 mg/kg, officials said.

Officials said construction can resume only after the site is cleaned up. It could take at least four months to examine and clean up the site, they said.

“We demanded the defense ministry, which is responsible for clean-up, conduct a detailed examination and report its results by May 31,” a Uijeongbu city government official said. “We will hold discussions with the defense ministry so as to resume the construction at an early date.”

The defense ministry rejected the contention that it is solely responsible for the cleanup.

“As contaminated soil was found six years after the ownership was transferred to the city of Uijeongbu, we have to jointly find out the source of contamination to clearly determine who is responsible for the cleanup,” a ministry official said.

“Then the responsible side should clean it up,” the official said, adding that the ministry plans to render active cooperation for the project to build the fire department headquarters at the site.