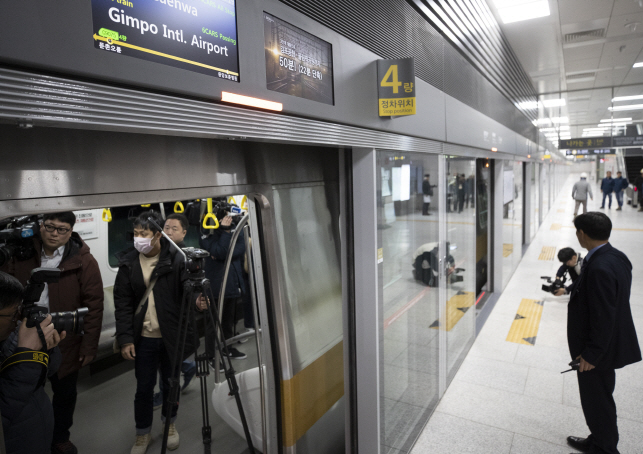 A station on the third section of Seoul Subway Line 9. (Yonhap)

SEOUL, Oct. 7 (Korea Bizwire) — Unionized workers of a Seoul subway began a three-day strike on Monday, demanding an increase in the number of workers and better working conditions.

The labor union of Seoul Metro Line 9 Corp., which operates the second and third sections of Seoul Subway Line 9, launched the strike at 5 a.m. after its last-minute negotiations with the management over its demands broke down.

The union is affiliated with the Korean Confederation of Trade Unions.

The union also demands the city government retract the privatization of Line No. 9.

The strikers, who account for about half of the subway company’s 250 workers, were to operate 100 percent of the scheduled train runs during the morning rush hours, 80 percent from 5-7 a.m. and 60 percent during the remaining hours.

The strike could also affect the operation of the other remaining section of the subway, which is operated by another company, Seoul Line 9 Operation Co., if scheduled train runs on the second and third section are delayed.

After the strike began, the subway company and the Seoul metropolitan government put in substitute workers so that the operation of the subway would be maintained at its usual levels.

In case the operation rate should fall below 90 percent, the Seoul regional government will operate 57 reserve vehicles on 46 city bus routes in the South Korean capital, among other measures.

Hwang In-shik, a spokesman for the local government, said the strike is not wrecking operations, adding the city government and Seoul Metro, which manages the operation of Seoul’s subway lines 1 through 8, “are making utmost efforts to deal with the situation.”

The labor union of Seoul Metro criticized the Seoul government for putting in substitute workers and thus denying laborers’ reasonable exercise of rights and neutralizing the ongoing strike.

It plans to hold its first strike from Oct. 16-18 to call for the management to agree on an increase in salary, the abolition of a wage peak system and the addition of safety personnel.