“We are very understanding of the decision. President Barack Obama is looking forward to meeting Park at a “mutually convenient time.”

“Obviously, we have been in close consultations back and forth with the government (of South Korea), watching the situation closely over the last several days. We are very understanding of the decision,”

- Mark Lippert, US Ambassador to Korea 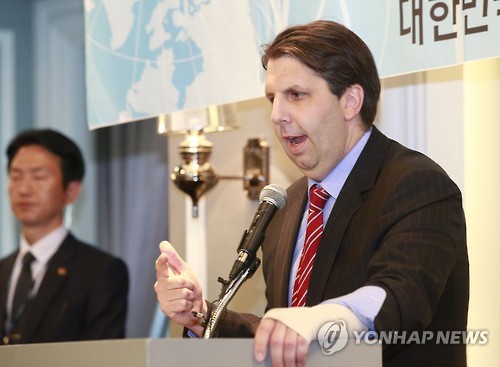 Park announced Wednesday that she would delay her visit to the U.S. capital for summit talks with Obama, which was initially planned for next week.

She cited the need to focus on efforts to fight the outbreak of Middle East Respiratory Syndrome at home.

Lippert said Park’s final call was based on days-long coordination between the allies.

He also recalled Obama’s cancellation of a scheduled Asia trip in 2013 due to the federal government shutdown at that time.

Obama later rescheduled a “successful” visit to the region, noted the envoy.

On the South China Sea issue, Lippert asked the Park administration to speak out against any provocative step harming regional stability.

He echoed recent remarks by U.S. Assistant Secretary of State Daniel Russel that South Korea needs to express its view in light of universal principles and the rule of law.

Lippert also expressed hope that Seoul and Tokyo will resolve their historical disputes through dialogue for “healing and reconciliation.”

As to North Korea, the envoy reiterated that the U.S. is prepared for sincere negotiations but the ball is now in the communist regime’s court.