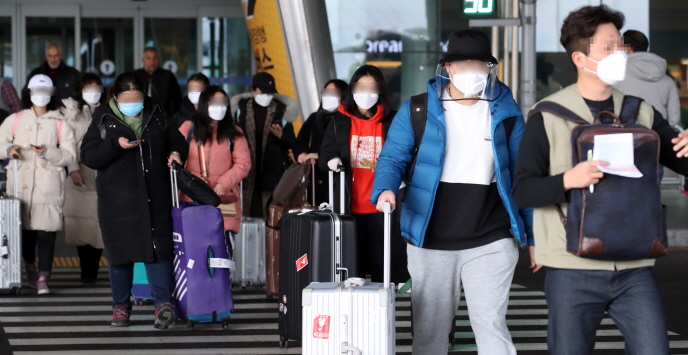 Chinese students enrolled in South Korean universities arriving at Incheon International Airport, west of Seoul, on Feb. 24, 2020, ahead of the start of the spring semester. (Yonhap)

The University Professors Association of Korea said the 13 COVID-19 patients include eight undergraduates, three graduate students, one professor and one inhabitant of a university-run apartment.

It said the patients are located across the nation, including Seoul, Busan and Daegu.

Notably, a Chinese national, identified as a student of Catholic Kwandong University in Gangneung, about 240 kilometers east of Seoul, was confirmed as a coronavirus patient on Sunday, triggering virus fears at and around university campuses nationwide.

The Ministry of Education has asked local universities to isolate their Chinese students returning for the spring semester after spending the winter break in China in separate dormitories for two weeks, estimating about 19,000 Chinese students are expected to come back to South Korea by the end of March.

Universities were also urged to closely monitor the health conditions of Chinese students staying off campus.

The Chinese student of Catholic Kwandong returned to South Korea via Incheon International Airport, west of Seoul, last Friday, was transported by a disinfected school bus to Gangneung and tested negative for the coronavirus at a hospital there before being admitted into a school dormitory building.

Two days later, however, the student tested positive for the virus.

According to the education ministry, approximately 33,000 Chinese students enrolled in South Korean universities are currently staying in China, and about 9,000 of them are expected to arrive here this week.

The ministry recently advised Chinese students who have not booked their return tickets to take the semester off, while local universities may delay the new school year by up to four weeks at the recommendation of the government.

The University Professors Association of Korea urged the government to pay more attention to the safety of South Korean students, citing dangers from asymptomatic patients.

“Universities should take more aggressive and drastic quarantine measures. For instance, entrances to all buildings should be reduced to one for more effective fever examination and monitoring of visitors,” the association said.