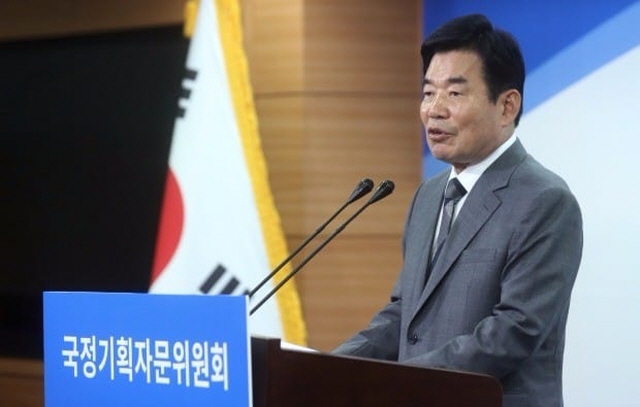 Kim Jin-pyo, the chief of the presidential policy planning advisory panel, speaks during a press conference at his office in Seoul on May 23, 2017. (image: Yonhap)

SEOUL, May 24 (Korea Bizwire) — The chief of the presidential policy planning advisory panel said Tuesday that it would explore ways to stamp out deep-seated corruption in the defense industry, long blamed for eroding the country’s military capabilities.

During a regular press briefing, Kim Jin-pyo also said the panel would seek a “comprehensive” approach to ensure that any anti-corruption campaign will not compromise the competitiveness of local defense firms.

His remarks came a day after Chung Eui-yong, President Moon Jae-in’s top national security advisor, said he plans to create a “defense reform” team under his office, which will mainly deal with corrupt practices in the industry.

“We will have in-depth discussions on why corruption in the defense industry persists and if there are measures to improve the industry environment or institutions (to prevent corruption),” Kim said.

“Although there has been corruption, we have to continue to enhance the competitiveness of the country’s defense firms … Thus, we will have to set a policy task from a comprehensive perspective,” he added.

Tasked with fleshing out policy visions and goals for the new liberal government, the panel kicked off its operations Monday. It serves as a power transition team for Moon as his five-year presidency began without any preparatory period due to the March 10 ouster of his scandal-hit predecessor, Park Geun-hye.

During Moon’s election campaign, he warned that he would sternly deal with any irregularities in defense deals, comparing them to “activities benefiting the enemy.”

Meanwhile, Kim also said that his panel will review whether to scrap a performance-based wage system that the former government pushed to introduce in public corporations on the grounds that it would increase productivity and efficiency.

The wage system had drawn much flak with critics arguing it was unilaterally introduced without due consultations with or consent from trade unions.

“As this issue was raised strongly during the election campaign, the panel’s division in charge of social affairs will look into it,” Kim said.

Touching on the five-year state management plan in the making, Kim said that the panel will compress Moon’s 201 campaign pledges into 100 to more effectively set up policy goals to deliver on them.

“It is a matter of categorization… it is not like reducing the number of pledges to 100,” Kim said.