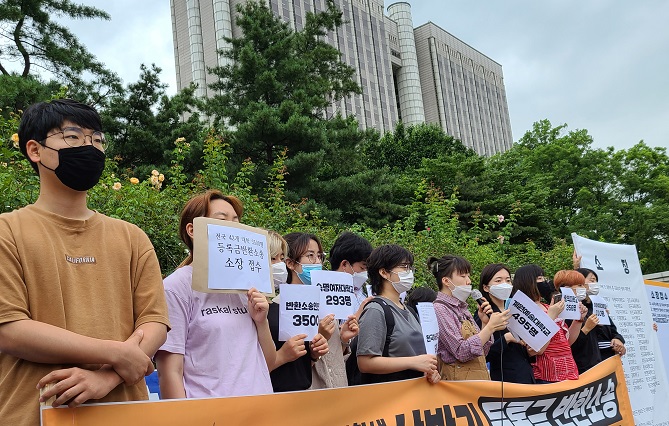 The Movement for Tuition Refund, a student group formed by the National University Student Council, holds a press briefing in front of the Seoul Central District Court in Seoul on July 1, 2020. (Yonhap)

SEOUL, Jan. 14 (Korea Bizwire) — Tuition fees at most universities are expected to remain unchanged as the coronavirus is raising prospects that online classes will continue for the new semester, frustrating both universities and students.

Seoul National University recently decided to freeze tuition for both undergraduate and graduate schools for the new 2021 academic year.

“Despite financial difficulties faced by schools, the prospects of another round of online classes are leading them to freeze tuition,” said a source from the Korean Council for University Education.

Another reason that is preventing universities from raising tuition is linked to the national scholarship program.

Although the dividends may not necessarily be financially significant, universities are still attracted to national scholarships since they help attract more students.

Universities are concerned that the tuition freeze will result in a financial crisis.

Students, on the other hand, are frustrated over the fact that they still need to pay an exorbitant amount of tuition for taking classes online.

“We expect that online classes will continue, and students are frustrated that there are no discussions on tuition refunds,” said Jeon Da-hyun, co-chair of the National University Student Council Network.