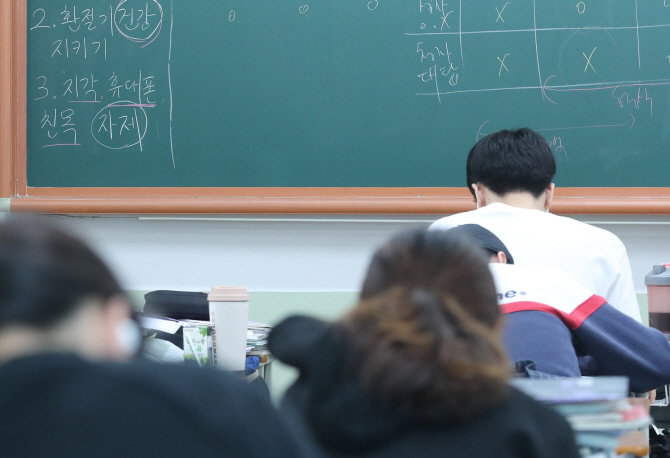 The CSAT, held only once a year, is considered critical for high school students and graduates aspiring to enter universities.(Yonhap)

SEOUL, Dec. 2 (Korea Bizwire) — Scores of this year’s College Scholastic Aptitude Test (CSAT) have been leaked to some applicants days ahead of their official release, due to a loophole in the test administrator’s computer system, the Ministry of Education said Monday.

The ministry admitted to the unprecedented incident, after an unidentified CSAT applicant insisted in an online student community Sunday night that his or her own CSAT score was somehow confirmed on the website of the state-funded Korea Institute for Curriculum and Evaluation (KICE).

The person disclosed that the score leak was possible simply by the use of web developer tools.

As word of the score leak spread in CSAT-related online communities, a large number of applicants posted photos of their CSAT score cards printed from the KICE website, many of them saying the scores seem genuine as they are on a par with their expectations.

South Korea held the annual state-administered college entrance exam, known as “suneung,” for about 500,000 applicants on Nov. 14, and KICE is scheduled to release their scores at 9 a.m. Wednesday.

The CSAT, held only once a year, is considered critical for high school students and graduates aspiring to enter universities. Critics say the score leaks could cause a problem of fairness for other applicants.

According to officials at the ministry and KICE, only repeat examinees were able to confirm their CSAT scores by changing the reference year for their previous scores to 2020.

KICE has now shut its score confirmation website. The education ministry said it and KICE will take responsibility for the leak.

“Some repeat examinees were able to confirm their CSAT scores late last night during a test-run of KICE’s score confirmation site. It was not a result of hacking,” said Song Geun-hyun, an official at the ministry.

“As login records remain, the (government) will look into the possibility of illegality in the score leaks,” the official said.