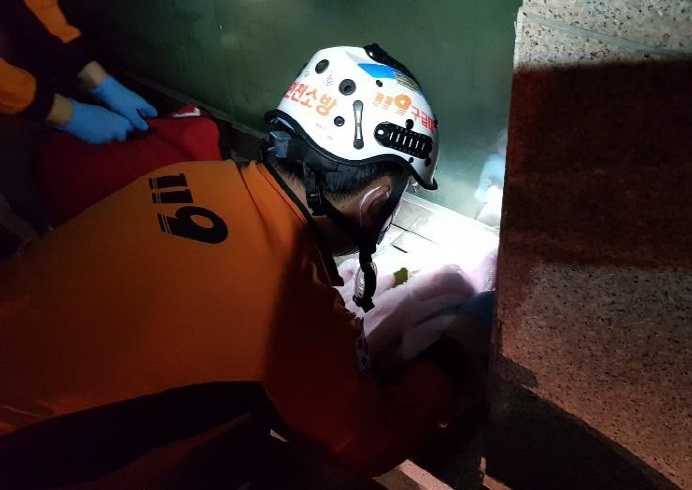 Despite suffering from hypothermia, the infant is expected to make a full recovery. (image: Incheon Gongdan Fire Station)

SEOUL, Apr. 1 (Korea Bizwire) — A railroad worker who was cleaning a train car after all the passengers had disembarked was horrified after opening the lid of a toilet.

A baby, whose umbilical cord remained attached, was left curled up inside the toilet. A 119 rescue team rushed to the scene, but the newborn had already died.

The incident occurred on March 29 inside the Mugunghwa train cabin on the North Chungcheong line heading for Daejeon.

The woman who abandoned her baby was a 21-year-old college student. She turned herself in at 6:30 a.m. on March 30, after feeling pressure when the media reported the case.

At 6:35 a.m. the previous day, a baby was found wrapped in a blanket in a flower pot in a residential area in Incheon.

A passer-by found the baby and reported it to 119, but paramedics were unable to resuscitate the infant. No notes or any other documents were left to help identify the baby.

Another baby was found on the same day in front of a church in Incheon. Fortunately, despite suffering from hypothermia, the infant is expected to make a full recovery.

Police, who turned to closed-circuit television (CCTV) footage to help shed light on the situation, apprehended the alleged mother of the newborn and have launched a formal investigation.

As such, there have been a series of cases of infant abandonment across the country.

According to data submitted by the Korean National Police Agency, 992 cases of baby desertion occurred in the 10 years from 2007 to 2016. An average of 100 babies a year are being abandoned.

Precious lives are being abandoned on the streets and trains without any protection for various reasons, such as a negative perception of single mothers, and financial difficulties.

This is why Park Soo-jin, the secretary-general of the Daejeon Catholic Social Welfare Organization, a single-parent family welfare facility, stressed the need for a social safety net that can support single mothers psychologically and financially in order to reduce infant abandonment.

It is also important to have a social atmosphere that warmly accepts single mothers.