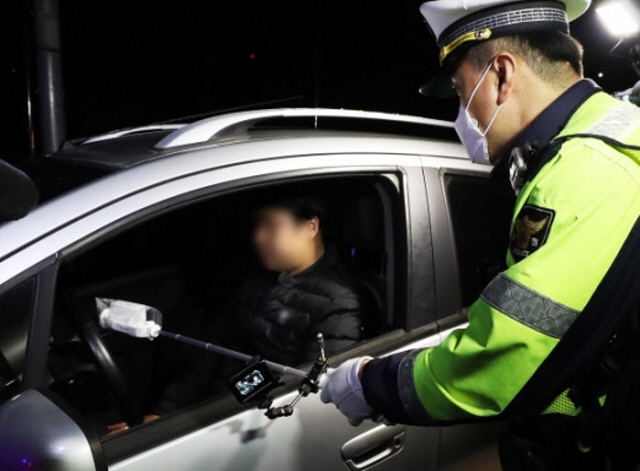 A police officer conducts a roadside breath test using a contactless breathalyzer designed to protect testers from coronavirus infections at an intersection in Gwangju, Gyeonggi Province, on April 18, 2020. (Yonhap)

The new alcohol testing device can be used to measure the driver’s blood alcohol content by holding out a stick in front of the driver for five seconds.

Law enforcement officials explained that all traffic police officers will still be required to sanitize their hands, and wear protective masks at all times even after the new system is implemented.

The new testing device will be wrapped in replaceable covers to prevent contamination, and the detection stick will be disinfected regularly.

Since then, police officers have been stopping cars on an irregular basis to crack down on drunk driving, which has led to a rising number of driving under the influence of alcohol (DUI) cases and related deaths.

The police agency plans to test the untact detectors over the next seven days and make improvements before implementing the new system nationwide.