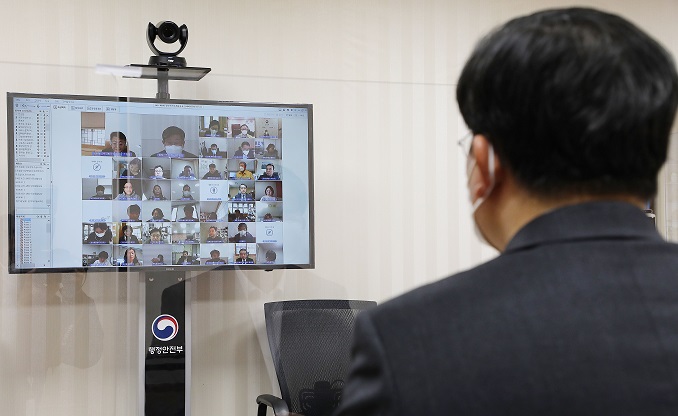 Interior Minister Jeon Hae-cheol speaks during a teleconference at the central government complex in Seoul on Jan. 28, 2021. (Yonhap)

SEOUL, Feb. 19 (Korea Bizwire) — The working habits of public officials at South Korea’s central government bodies are shifting fast towards non-face-to-face format in the midst of the COVID-19 crisis.

According to an analysis by the Ministry of the Interior and Safety, the number of PC-based video conferences held at the nation’s government agencies last year totaled 89,389, up 48 percent from 60,391 a year before.

The number of documents distributed online through the e-government system that enables ordinary citizens to submit or receive official documents to/from government offices more than doubled from 226,526 in 2019 to 540,574 in 2020.

The number of work-from-home public officials also registered a dramatic increase, rising from merely two in 2019 to 7,782 in 2020.

Primarily due to the expansion of work-from-home arrangements, the number of public servants who worked at smart work centers fell by 34 percent to 372 from 565, while the number of those engaged in flexible work arrangements declined by 16 percent to 23,682 from 28,084.