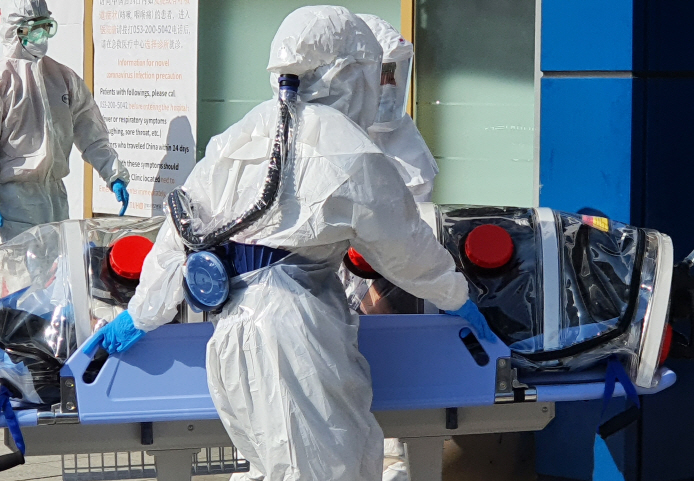 A patient suspected of carrying the new coronavirus, COVID-19, arrives at Kyungpook National University Hospital in Daegu, some 300 kilometers southeast of Seoul, on Feb. 19, 2020. (Yonhap)

SEOUL, Feb. 20 (Korea Bizwire) — U.S. Forces Korea (USFK) has banned “non-essential” travel to and from South Korea’s southeastern city of Daegu and shut down all of its children-related facilities there in the wake of a surge in new coronavirus cases in the region.

Since Wednesday, South Korea has confirmed more than 70 additional cases of the COVID-19 virus, and a majority of the newly confirmed patients are from Daegu, 300 kilometers southeast of Seoul, and its surrounding North Gyeongsang Province, according to Seoul’s health authorities.

The total figure of confirmed cases stood at 104, including one death, as of Thursday.

“As a Health Protection measure, I’ve elevated the risk for USFK peninsula-wide personnel and installations to moderate until KCDC completes its contact trace procedures,” USFK Commander Gen. Robert Abrams said, according to a release updated on Wednesday.

As proactive and precautionary measures, USFK prohibited all service members’ non-essential travel to and from Daegu, and minimized off-installation travel.

“I highly request all family members, civilians and contractors do likewise regarding their travel as well,” Abrams said.

“All USAG-Daegu and Area IV schools, child development centers and child and youth services activities will be closed Thursday, and we will make a decision regarding a Friday closure tomorrow,” he added. USAG means U.S. army garrison.

Visitors who are not performing essential missions or official business will be denied access to its military installations in Daegu for 24 hours from Thursday, and the directive is to be reassessed every 24 hours, according to the military.

USFK also implemented self-quarantine measures on all service members who have attended the New World Church, also known as Shincheonji Church of Jesus, since Feb. 9, while recommending the same measures for their family members, civilians and contractors.

Most of the newly confirmed patients in Daegu were found to have attended the same religious services as the country’s 31st COVID-19 patient, which were held in Daegu earlier this month.

“I want to emphasize the care and well-being of our Daegu service members, families and civilians is a top priority of mine,” Abrams said, calling for good hygiene practice as the best way to control the spread of virus.

No confirmed or suspected cases among U.S. service members and their family members have been reported so far, according to USFK officials.

USFK, meanwhile, dismissed rumors that families of U.S. soldiers in South Korea are preparing to evacuate to the U.S. due to the virus outbreak, adding that the military has shared its anti-virus steps on its website.