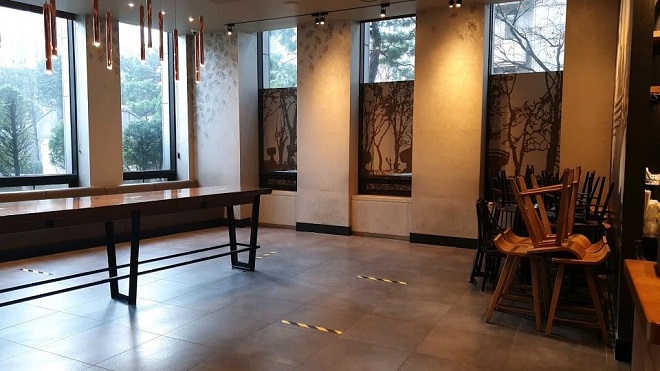 The new Level 2 guidelines took effect at the start of the day after the government raised the scheme to stem the recent surge of the coronavirus.

Most notably, cafes were ordered to offer takeout and delivery only, while restaurants were told to do the same after 9 p.m.

Small cafes, in particular, bore the brunt of the restriction as large coffee shop franchises still had customers lining up to buy their drinks.

“I thought about clearing the chairs but then decided to leave them because I was afraid it might look as though we’ve closed completely,” said the owner of a small coffee shop in the central Jung Ward, who only gave his surname Kwon.

“I’m worried about what I should do until Level 2 is over,” he said. 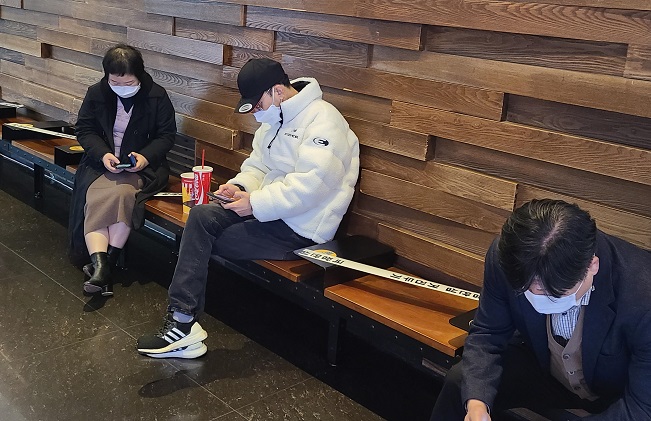 This photo, taken Nov. 24, 2020, shows visitors consuming drinks in the lobby of a movie theater in Seoul. (Yonhap)

The government has said it intends to keep the capital area under Level 2 for two weeks.

The same was said last week when the government raised social distancing rules to Level 1.5 on Thursday but that scheme lasted only five days as the nation continued to see over 300 new cases a day.

“It’s OK in the mornings when most of our customers ask for takeout, but I’m worried about lunchtime because that’s when they sit to drink,” said a cafe manager in the western Mapo Ward.

“A few people in the morning wanted to sit, and when I told them they couldn’t, they just left.”

Moviegoers lamented the ban on eating inside theaters.

At a multiplex near Gangnam Station in southern Seoul, tickets were sold for only half the available seats and even then, only five people were seated before the start of a movie. A sign asked visitors to eat their food in the lobby before entering theaters.

“I came in the morning to avoid other people,” said a 23-year-old college student surnamed Shin. “I love caramel popcorn and always have it when I watch a movie, but it’s too bad I can’t.”

Another moviegoer, a 33-year-old office worker surnamed Son, agreed that eating popcorn was one of the pleasures of going to a movie theater, but he admitted that it was probably best not to, given the pandemic. 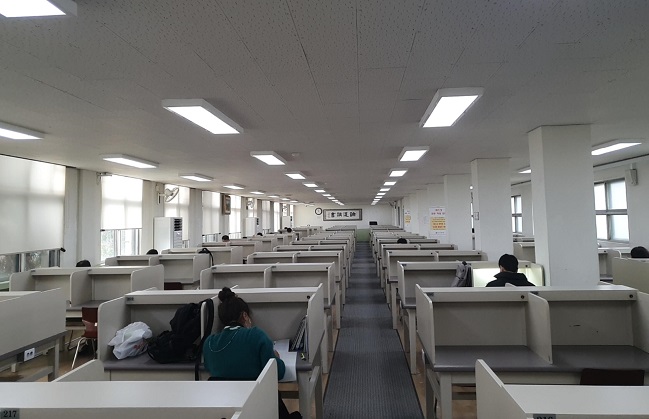 Libraries were open at 30 percent capacity, while internet cafes had to keep a limit of one person per 8 square meters.

“I’ve seen fewer people since the start of the pandemic, but it feels like there are even fewer today,” said a 74-year-old visitor at the Jeongdok Public Library in Jongno Ward.

A 28-year-old visitor preparing for a civil servant exam said he is afraid libraries will close completely.

“If not for libraries, I don’t know where I would study,” he said.