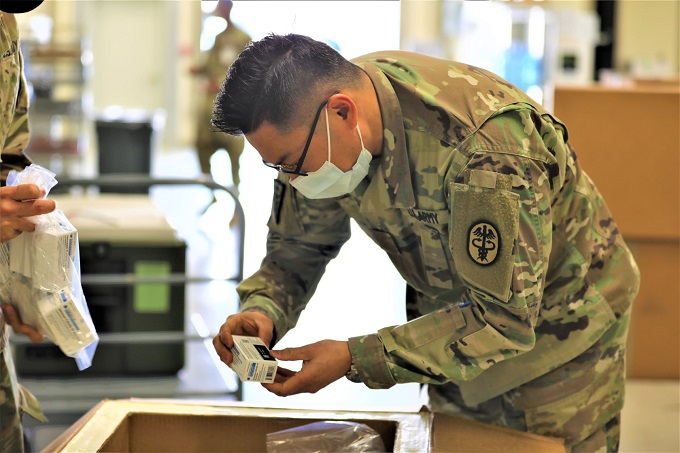 This photo, captured from the Facebook account of the U.S. Forces Korea (USFK), shows an American medic looking at the first batch of Janssen COVID-19 vaccines, which the USFK introduced on March 9, 2021, at Brian D. Allgood Army Community Hospital at Camp Humphreys in Pyeongtaek, 70 kilometers south of Seoul.

SEOUL, May 17 (Korea Bizwire) — The U.S. Forces Korea (USFK) has offered to provide part of its COVID-19 vaccines to the Korean government to help relieve the country’s vaccine shortage, government sources said Monday.

USFK recently delivered its intention of providing around 13,000 doses of Johnson & Johnson (J&J) vaccines, and South Korean defense and health authorities are discussing how to use the vaccines and other details, according to the sources.

In March, USFK began administering J&J’s Janssen vaccine to its members in addition to Moderna’s, and around 70 percent of the population have been vaccinated so far.

“We are discussing with the U.S. side diverse ways of cooperating on the issue,” a ministry official said.

South Korea has been struggling to boost its COVID-19 vaccine supply and has sought help from the United States to address the issue.

“USFK continues to work closely with the Korea Disease Control and Prevention Agency and the Ministry of National Defense regarding FDA-authorized use of COVID-19 vaccines,” USFK spokesperson Col. Lee Peters said in a statement.

The Janssen vaccines, if shipped, are likely to be administered to civilians, not service members, as the defense ministry already secured vaccines for troops.

The vaccination program for those aged 30 and older was to be completed in the coming days, and troops in their 20s are expected to receive Pfizer’s COVID-19 shots starting around June.