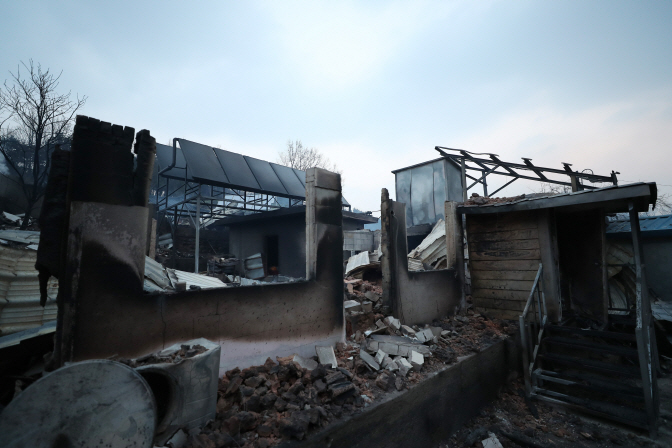 It is a great gesture to help with the mountain fire, but it’s not desirable to have a photo taken of the affected village. (Yonhap)

GOSEONG, Apr. 16 (Korea Bizwire) — The misbehavior of some outsiders in the fire ravaged areas of Gangwon Province is making it difficult for the victims.

According to residents of the forest fire-stricken area of Sokcho and Goseong County in Gangwon Province on Monday, some outsiders came to the village and took pictures of houses that had been burned down.

Some of the outsiders even took pictures of proof with burned houses or buildings as a background, leaving victims out of their misery after losing their entire fortune.

This is why in some villages there are signs and warnings not to enter the village or take pictures.

It is a great gesture to help with the mountain fire, but it’s not desirable to have a photo taken of the affected village.

Meanwhile, at least one robbery has also been reported in the aftermath of the fire, bringing tears to the victims again.

A farmer who had grew bonsai trees in Sokcho said that the day after the fire, about 10 of the remaining bonsai trees were stolen. He was heartbroken at the theft of his precious trees.

The police are stepping up patrols in areas damaged by fire to prepare for various crimes such as burglary and other criminal acts that take advantage of the chaotic atmosphere.