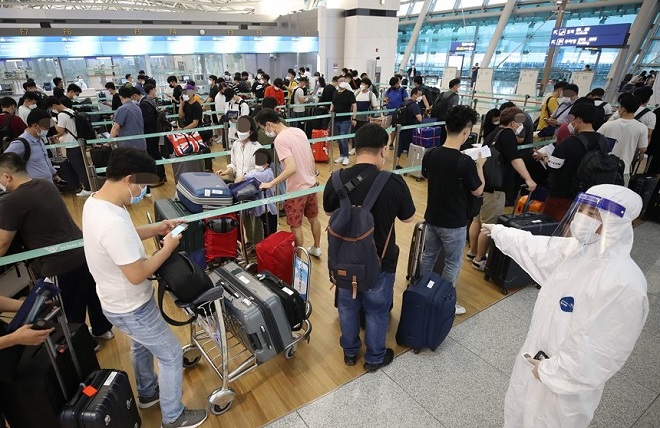 South Korean businesspeople line up in the departure lobby of Terminal 1 at Incheon airport, west of Seoul, on July 22, 2020, before their departure to Vietnam. (Yonhap)

SEOUL, June 7 (Korea Bizwire) — Frustration is rising among South Korean firms in Vietnam as the Vietnamese government is pressuring them to make contributions to a public fund to buy COVID-19 vaccines.

Local sources reported that the Vietnamese government has reached out to South Korean firms, asking them to contribute to the vaccine fund.

The government also sent out text messages containing bank account numbers to all mobile carrier subscribers to ask for donations.

One source working for a South Korean company in Ho Chi Minh City asked authorities if they would be entitled to receive vaccinations in exchange for the contribution. “We cannot promise anything,” was the response.

South Korean manufacturers in Long An and Dong Nai Province, too, are frustrated by pressure from the Vietnamese government to contribute to the public fund.

“We have no choice but to pay. Who knows what will happen if we don’t contribute?” one of the sources said.

The Vietnamese government recently announced plans to organize a public fund to purchase COVID-19 vaccines with the help of private companies.

The government set a goal of raising US$1.1 billion to buy 150 million doses of vaccine, quickly meeting its target based on help from local public and private companies.

So far, there are no South Korean or other foreign companies that have officially contributed to the vaccine fund.