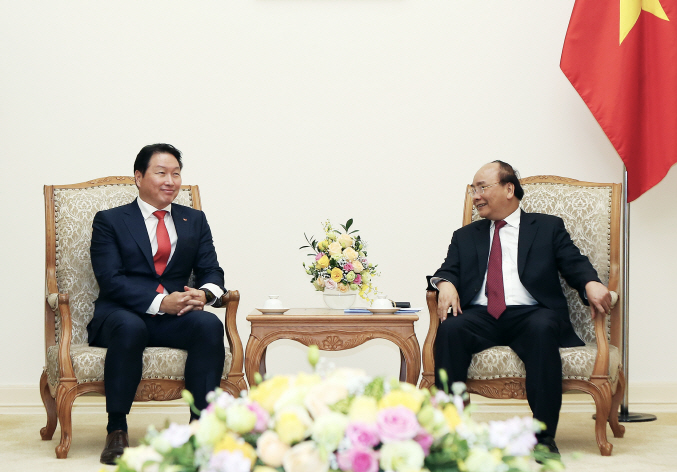 SEOUL, Nov. 9 (Korea Bizwire) — Vietnamese Prime Minister Nguyen Xuan Phuc has asked the chairman of South Korea’s SK Group to participate in the privatization of state-owned companies in one of the world’s fastest growing economies, the conglomerate said Friday.

“We will spare no effort in providing comprehensive assistance in cooperation with SK,” Phuc said in a meeting with SK Group Chairman Chey Tae-won at his office in Hanoi on Thursday, according to the business group.

The two held their first face-to-face talks in November last year on how to boost cooperation between Vietnam and the South Korean energy-to-semiconductors conglomerate.

Chey expressed hope that SK Group will invest in the privatization of state-owned companies and that the two sides will further accelerate cooperation in other sectors, SK Group said.

Phuc said the Vietnamese government is expediting privatization and divestment in major enterprises, primarily in the fields of telecommunications, chemicals, processing industry, beverages, aviation and energy, according to the Voice of Vietnam.

“During the equitization process, the Vietnamese Government always incentivizes foreign investors, including the SK Group with strong capability in terms of finance, technology, brand and market, to engage in the process as strategic investors,” Phuc said in English-language comments posted on the website of the Voice of Vietnam.

In September, SK Group acquired a 9.5 percent stake in Masan Group Corp., a Vietnamese food and beverage group, for US$470 million.

In recent years, SK Group has stepped up its investment drive for overseas companies and partnerships that can lead to synergy in its business fields, which include refining, telecommunications and construction.