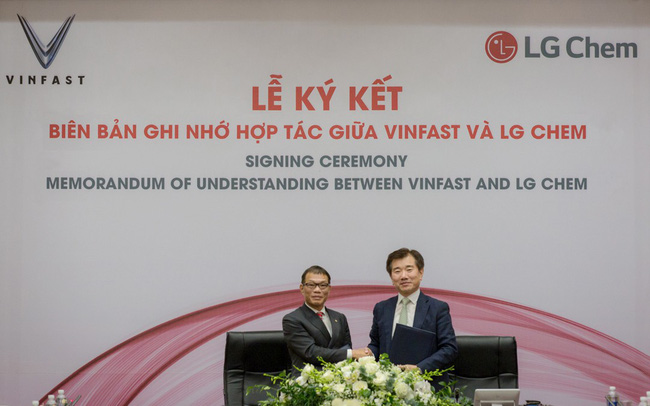 Two executives of VinFast and LG Chem shaking hands at the signing ceremony of a memorandum of understanding for the provision of batteries. (image: Vinfast)

LG Chem will also supply batteries for electric buses, smartphones and other products in the Vingroup’s ecosystem, VinFast said, citing the memorandum of understanding inked between the two sides in Hanoi on Friday.

VinFast said it will be responsible for the construction and production lines of the plant in the northern port city of Haiphong to ensure that it is ready for operations in the second quarter of next year.

“The partnership with LG Chem is an important initial step for VinFast in particular and Vingroup in general to get a grasp of the global advanced technologies in order to produce premium products and contribute to the development of Vietnam’s supporting industry,” Vo Quang Hue, deputy CEO of Vingroup, said in comments posted on the website of Vinfast.

“We have forged a strategic cooperation with VinFast to make inroads into Southeast Asia, which is expected to grow rapidly,” said Yoo Won-jae, an official handling the issue at LG Chem. He said LG Chem will hold talks with VinFast later to work out the details of the battery supply arrangement.