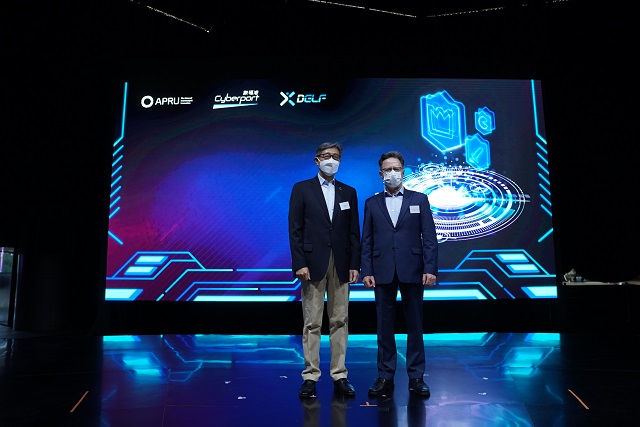 Cyberport and the Association of Pacific Rim Universities (APRU) hold the first Esports MetaGame Conference, gathering leading scholars and professionals from North America, Europe and the Asia-Pacific region to discuss the development direction of digital entertainment and esports.

Hong Kong, Dec. 14 (Korea Bizwire) – Cyberport’s annual Digital Entertainment Leadership Forum (DELF) concluded successfully. The event generated over 100 hours of content on its virtual platform, drawing a total of 500,000 views from almost 30 countries or regions. The two-day forum was held in a virtual and interactive format for the first time and brought together more than 60 speakers to share on the topic “New Normal of Digital Entertainment: From Gamification to Esportification”, as well as staging a number of tournaments, start-up showcases and pitching contests to tap into the esports and digital entertainment craze. On the second day of the forum, Cyberport and the Association of Pacific Rim Universities (APRU) held the first Esports MetaGame Conference and announced a number of collaboration initiatives, including the APRU Esports Fellowship Program.

The first Esports MetaGame Conference gathered leading scholars and professionals from North America, Europe and the Asia-Pacific region to discuss the development of Hong Kong as an emerging digital entertainment and esports hub, as well as assisting students in career planning through collaboration across borders. The conference focused on gaming, policy discussions and next generation learning to discuss two major themes , namely “International Exchange: Emerging Esports Ecosystem”, which explored the role the Hong Kong esports industry can play in the regional and global esports ecosystems, and how the government, higher education and the esports industry can promote the vigorous development of the esports ecosystem; as well as “Promoting Equality in Esports and Eliminating Obstacles” which shed light on the disparity in the treatment of women and minority players, and oft-debated lack of female and ethnic minority esports players at the top level, before examining strategic suggestions on the development of the esports ecosystem in hopes of creating a more diverse and inclusive competition culture for esports players around the globe.

Cyberport, via the Cyberport Academy, will also introduce a number of new projects with APRU to provide more opportunities for the youth. Cyberport, APRU and Tecnológico de Monterrey in Mexico have joined in partnership to launch the year-long virtual APRU Esports Fellowship Program which will foster the growth of critical skills for future Esports leaders   by contributing to outcomes for students such as internship and job placement opportunities and activities such as hackathons, pitching competitions and industry networking. The planned curriculum goes beyond the technical training related to esports and focuses on ethical leadership, industry relations, community building, design thinking, entrepreneurship, and cultural awareness. Students will build deep connections across the entire esports industry – publishers, league tournaments, and its technological advancement – for a greater opportunity to develop their esports skillset and career.

Peter Yan, Chief Executive Officer of Cyberport, said, “Cyberport is committed to cultivating local young talent and promoting I&T industry development.  Digital entertainment, including esports and gaming, is one of the key clusters and esports, in particular, has been growing rapidly across the world and the Pacific Rim, bringing exciting new opportunities to our youth. We extend our warmest welcome to APRU in joining the Cyberport Community to become an important partner and adding to our global partnership network. The Metagame Conference held together with DELF marked the first of many collaborations between APRU and Cyberport.  The APRU Esports Fellowship Program announced in the Metagame Conference leverages the APRU’s premier network of leading research universities all over the world to facilitate the development of esports in this region providing greater opportunities to the younger generation and the industry.”

Dr. Christopher Tremewan, Secretary General of APRU, said, “Esports is changing society because it is not just gaming. It’s a new medium, a powerful new way of interacting socially – like Facebook was when it started and when few realised its future. Also, the esports industry is socially beneficial and economically productive, not only as an industry but in the many applications it can have beyond it. We have to look ahead, and for that research is needed as well as closeness to the players and the industry.”

APRU is a premier alliance of research universities, established in Los Angeles in 1997 by the presidents of UCLA, Berkeley, Caltech and the University of Southern California. It aims to foster collaboration between member universities to promote economic, scientific and cultural advancement in the Pacific Rim. APRU now has a membership of more than 50 leading research universities.

Apart from the sharing sessions, 15 online tournaments were arranged in DELF to enable participants to experience the pleasure and excitement brought by digital entertainment and esports. The DELF 2020 virtual event platform is open for access until 11 Jan 2021. For more details on the event, please visit the Digital Entertainment Leadership Forum website (https://delf.cyberport.hk/en/index).