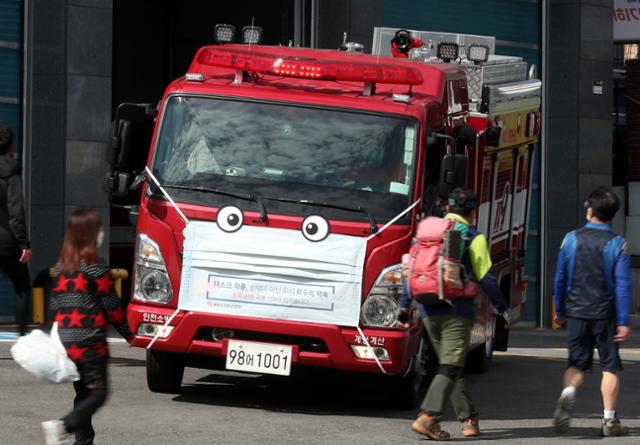 A fire engine with a large mask in front is parked at a fire station in Incheon, west of Seoul, on Oct. 7, 2020. Firefighters installed the mask as part of their efforts to raise public awareness of the importance of wearing masks amid the coronavirus pandemic. (Yonhap)

SEOUL, Oct. 8 (Korea Bizwire) — South Korea’s daily new infections rose by double digits Thursday, while the country is still worried over a possible resurgence of the coronavirus after a long holiday and another three-day break set for later this week.

The country added 69 COVID-19 cases, including 60 local infections, raising the total caseload to 24,422, according to the Korea Disease Control and Prevention Agency (KDCA).

The country’s new COVID-19 cases had risen by double digits for six consecutive days since last Friday, but bounced back to 114 on Wednesday.

Health authorities have warned that the country could see an uptick in COVID-19 cases after the five-day Chuseok holiday that ran through last Sunday.

Health authorities are especially concerned that asymptomatic patients could have spread the virus during the Chuseok fall harvest holiday.

The authorities also warned of increased risk of infection if people loosen social distancing measures during the upcoming holiday this week.

The country is set to have a three-day break from Friday to Sunday when Hangeul Day, which celebrates the Korean alphabet, is combined with the weekend. The country earlier designated a special two-week period for toughened virus curbs until Sunday to prevent outbreaks.

“We will tentatively make an announcement on Sunday about the level of the social distancing following the special two-week period,” Sohn Young-rae, a senior health officer, said. 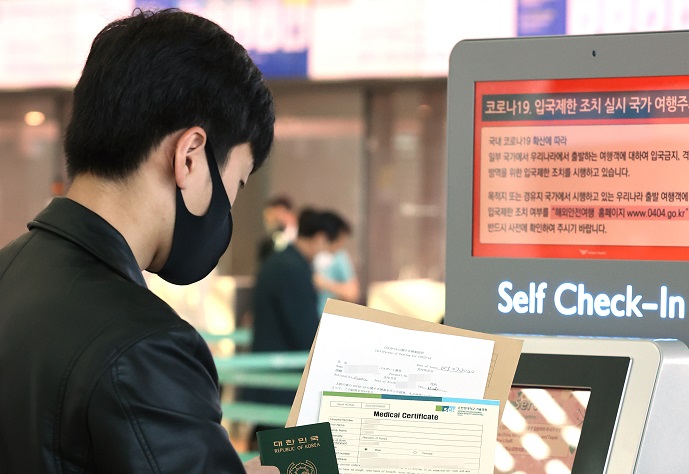 A traveler shows a medical certificate verifying his negative COVID-19 test at a check-in counter in Incheon International Airport, west of Seoul, on Oct. 8, 2020, when South Korea and Japan put into practice an agreement on the fast-track entry of businesspeople without a two-week coronavirus quarantine amid the pandemic. (Yonhap)

Of the newly identified local infections, 19 cases were reported in Seoul and 22 cases in Gyeonggi Province that surrounds the capital. Incheon, west of Seoul, reported five more cases, the KDCA said.

The number of cases linked to a hospital in Dobong Ward, northern Seoul, reached 51 with one more patient being reported, the authorities said.

The number of cases traced to a family in Daejeon rose by 11, bringing the total to 12, it said.

The KDCA said the number of cases with unclear transmission routes accounted for 18.9 percent of the total new cases over the past two weeks.

The number of newly identified imported cases came to nine, down from 20 a day earlier, the authorities said.

There were two additional deaths from COVID-19, raising the death toll to 427, they said. The fatality rate was 1.75 percent.

The number of seriously or critically ill COVID-19 patients came to 97, according to the KDCA.

The total number of people released from quarantine after making full recoveries stood at 22,463, up 129 from the previous day.