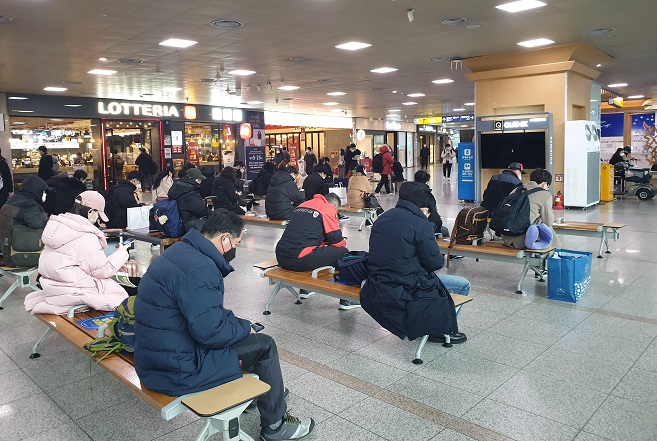 SEOUL, Feb. 10 (Korea Bizwire) — The coronavirus pandemic put a damper on travel this Lunar New Year, with fewer people flocking to train stations and airports for the annual visit home.

Seoul Station, which had been bustling before the pandemic, had relatively few passengers waiting for trains on Wednesday morning, before drawing a bigger crowd by the afternoon.

In the waiting area, most benches were full except for the middle seats that were left empty to comply with social distancing protocols.

Some people carried traditional gifts, such as fruits and beef, while sanitation workers walked around cleaning and disinfecting every surface.

“There are more people than usual because it’s the holiday, but it doesn’t compare to previous Lunar New Year when the terminals were packed with people waiting for their trains,” said a 47-year-old sanitation worker surnamed Kim.

This year the holiday will begin Thursday and last four days including the weekend.

To contain the spread of the coronavirus, the government has put in place special measures for the holiday, including selling only window seats on trains and charging toll fees on highways.

Private gatherings of five or more will continue to be banned through Sunday, making it difficult for extended families to gather as is the custom on Lunar New Year. 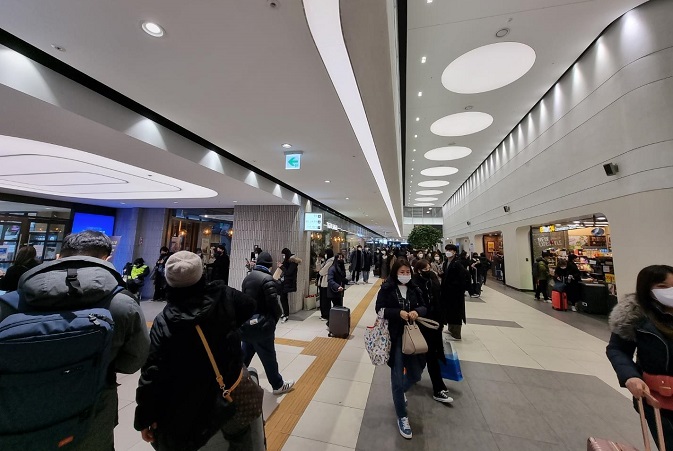 People walk through Seoul Express Bus Terminal on the afternoon of Feb. 10, 2021. (Yonhap)

Some people said they are visiting their relatives alone because of the ban.

“I couldn’t go last Chuseok because of the coronavirus, so I’m going today,” a 35-year-old husband waiting for the 9 a.m. train to the southeastern port city of Busan said, referring to the fall harvest holiday. “I left my wife and child at home and am going alone.”

A 16-year-old girl said she was headed to the northeastern city of Gangneung to see her grandmother, but only with her 11-year-old sibling.

“Our parents said they couldn’t go because there would be more than four of us,” she said. “They told us to go on our own and booked us tickets.”

Vendors inside the station couldn’t hide their disappointment at the smaller crowds.

One man who sells traditional pastry said he used to make at least 2 million won (US$1,808) a day ahead of Lunar New Year or Chuseok, but on Tuesday he only made 700,000 won.

“I think people aren’t buying because they’re not allowed to eat on the train,” he said with a sigh.

At Seoul Express Bus Terminal, the scene was much the same.

In the morning, several people carried gifts and pulled suitcases, but there were no groups of families traveling together or lines in front of ticket booths. 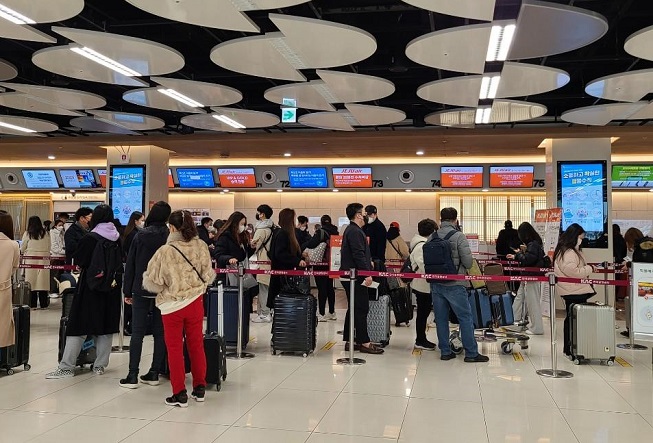 People wait in line at Gimpo International Airport in western Seoul on the afternoon of Feb. 10, 2021. (Yonhap)

By afternoon, buses to major cities, such as Daegu and Busan, were full, and one passenger said he almost missed his bus because of heavy traffic on the way to the terminal.

Another said he purposely chose an early morning bus because he didn’t want to be in close proximity to other passengers in a tight space.

“We expect the number of customers using the terminal to be around half of what it was last year,” a terminal official said.

At Gimpo International Airport in western Seoul, travelers were not only heading home but also going on vacation to the southern resort island of Jeju.

A Korean Air employee said that of the airline’s 40 flights scheduled for the day, 30 were bound for Jeju.

One airport worker said he had worked there for four years and didn’t feel there were fewer travelers than on previous Lunar New Year holidays.

Traffic on highways began to slow by the afternoon.