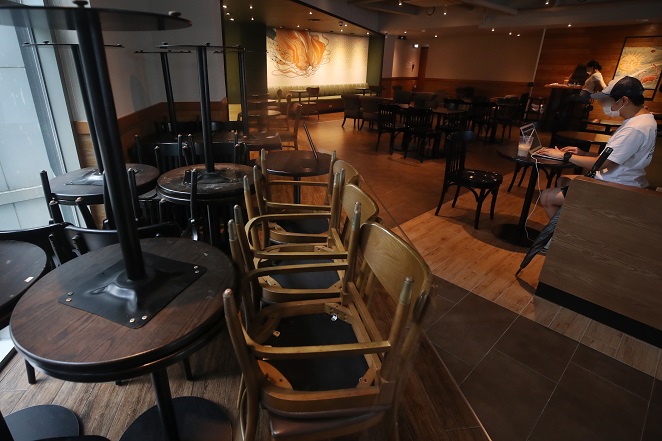 Tables and chairs are moved to a corner of a large cafe in downtown Seoul in preparation for the government’s heightened social distancing rules that go into effect on Aug. 30, 2020. (Yonhap)

SEOUL, Sept. 22 (Korea Bizwire) — Owners of small businesses and self-employed people hit hard by a recent resurgence of the new coronavirus in the country will get financial aid from the government under a new extra budget that passed the National Assembly on Tuesday.

The 7.8 trillion-won (US$6.7 billion) extra spending aims to cushion the economic impact from the virus resurgence in mid-August. It centers on some 3.8 trillion won allotted for 3.77 million people affected by the virus, including 3.2 trillion won to be distributed as New Hope financial assistance for 2.91 million small business owners and self-employed people.

Under the New Hope aid plan, business owners with annual sales of 400 million won or less will receive 1 million won each if they experienced any dent in sales since the resurgence.

Young people aged between 16 and 34 and senior citizens aged 65 or above will each receive 20,000 won in mobile service subsidy.

The extra budget will also cover financial assistance for a greater number of taxi drivers and parents with young children than initially proposed by the government.

Daycare centers and schools had been ordered to shut down in the aftermath of the virus resurgence to avert infection risks among children and students. 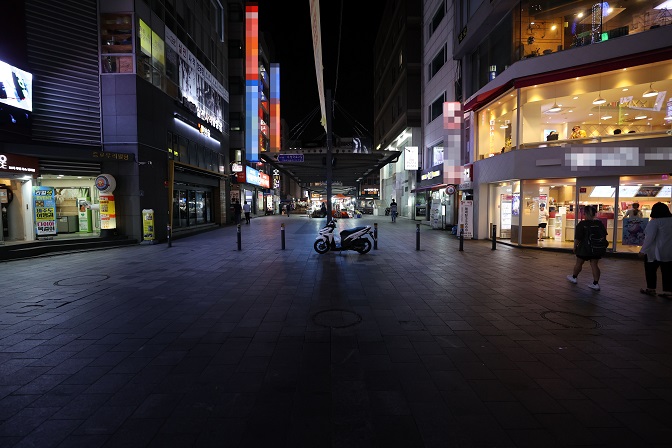 A street in Jongno, one of the busiest districts in Seoul, is mostly empty on Aug. 19, 2020, as high-risk facilities, including karaoke rooms, clubs and PC cafes, were ordered to shut down for two weeks amid a spike in coronavirus cases in the country. (Yonhap)

The spending package also includes a budget on vaccinating more than 1 million disabled and low-income people against influenza as well as spending assigned for stockpiling COVID-19 vaccines to cover 20 percent of the South Korean population, according to party officials.

The floor leaders of the ruling Democratic Party and the main opposition People Power Party reached the deal only hours before it was put to a vote in the full-floor session as the government is under pressure to dole out the emergency assistance before the Chuseok holiday next week.

The bill is the fourth extra budget drawn up this year to fend off the impact of the pandemic on the economy, especially on small merchants and self-employed people hit harder by the second wave of infections.

About 59 trillion won was approved in the previous three rounds of COVID-19 response extra budget setting between March and July. It is the first time since 1961 that the country has drawn up four rounds of extra budget in one year.

The government is planning to dole out the majority of the new emergency assistance package before the Chuseok autumn harvest holiday, which falls on Oct. 1 this year.