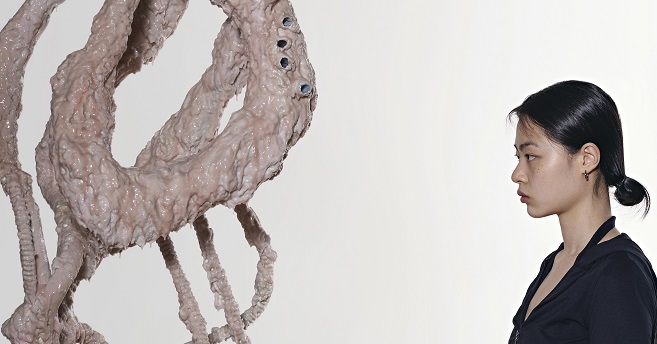 This photo, provided by Art Sonje Center on July 27, 2020, shows sculptor-installation artist Lee Mi-re examining her work “Carriers” (2020) on display at her solo exhibit at the art gallery in central Seoul.

You can’t unsee it once it’s seared into the brain’s visual cortex.

Resembling an animal’s digestive organs, the installation work hanging from the ceiling and connected to the floor combines motors and hose pumps that repeats movements as it sucks up, transports and extracts a gooey gel, made with glycerin and resin, through its holes and cracks.

It reminds viewers of animatronic props from Hollywood monster films such as the “Alien” series or John Carpenter’s “The Thing” from the ’70s or the ’80s.

As the pumped gel covers and travels through the sculpture, sounds are produced at odd moments along with the rhythm of the machinery movements, giving off a biomechanical vibe.

The piece may strike some people as the stuff of nightmares.

But to Lee, “Carriers,” put on display at her solo exhibition at Art Sonje Center in central Seoul, suggests an experience of being imbued with the world within the most private and physical realm of the senses, evoking the human condition at the most primal of stages.

Other works featured by Lee, who has been active in South Korea and the Netherlands, include “Concrete Bench for Carriers,” a concrete cast sculpture created so that viewers can sit down to observe the exhibit, and “Horizontal Forms,” which exhibits a weaker range of energy activity while placed side by side with “Carriers.” 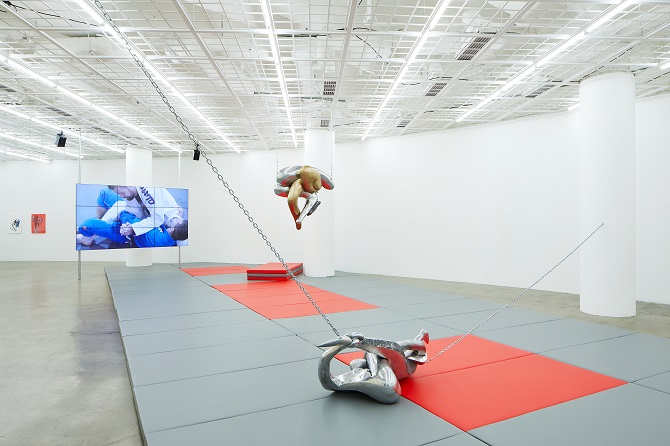 The solo exhibit “Saturday, Tuesday” by French multimedia artist Camille Henrot, held simultaneously at Art Sonje, features two works — “Saturday” and “Tuesday” — aimed at examining the forms of behavior and emotion that make up our existence, twisting the dualistic power structure and relationship to authority as we perceive it as individuals or communities.

Henrot’s “Saturday” (2017) video is an amalgam of imagery focusing on the Seventh Day Adventist Church, an evangelical millenarian Christian denomination that celebrates the Sabbath and practices baptism rituals on Saturday.

“Tuesday” (2017) is an interdisciplinary installation piece combining video and sculpture.

The film part interweaves images of racehorses running, breathing and having their hair groomed with others showing jujitsu practitioners in slow motion as they train on mats before a match.

Next to the video are two sculptures that represent the body in an entangled form highlighting the blurring of the line between acts of surrender and control.

Next to the grotesque and the abstract, South Korean sculptor Don Sunpil presents an exhibit that is as experimental but much more down to earth in terms of its approach of using figurines.

In his solo exhibit “Portrait Fist,” Don explores how we understand and consume images of faces.

It showcases 24 sculptures of heads with various figurine objects, such as that of a cartoon character, video game console, motorcycle, placed on the spot where the face — the eyes, nose and mouth — is supposed to be.

A television in the middle of the exhibit offers Don’s thoughts on his art philosophy. All three independent solo exhibits are open simultaneously at Art Sonje until Sept. 13.