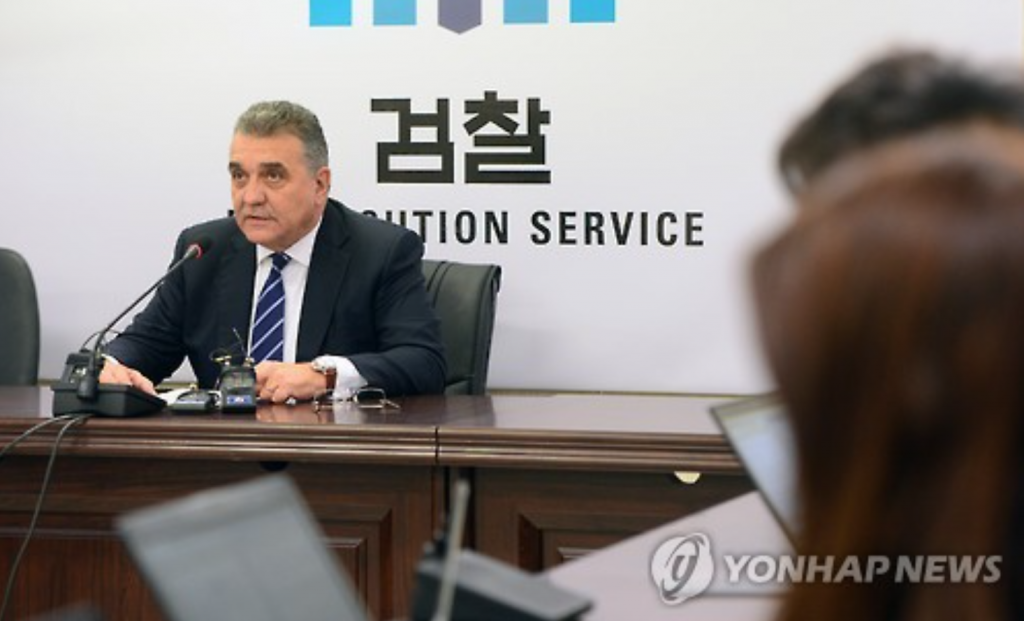 Francisco Javier Garcia Sanz, a member of Volkswagen AG’s Board of Management, speaks to reporters at the Seoul Central District Prosecutors’ Office on Jan. 18, 2017, during his visit to the office. (image: Yonhap)

SEOUL, Jan. 18 (Korea Bizwire) – A senior executive of German carmaker Volkswagen visited Seoul prosecutions’ office on Wednesday and apologized to South Korean customers for the emissions scandal surrounding some of its vehicles.

Francisco Javier Garcia Sanz, a member of Volkswagen AG’s Board of Management, visited the Seoul Central District Prosecutors’ Office to discuss matters related to vehicles that have been confiscated by the authorities in the course of their investigation into Volkswagen’s local unit last year.

“First and foremost, I would like to express my deepest regret and apologies to all Korean customers for the inconvenience and disappointment raised in the events of the past year regarding Audi Volkswagen Korea (AVK),” he said during a press conference held at the prosecutors’ office. “Volkswagen Group and AVK remain committed to the Korean market and regaining the trust of Korean customers.”

Still, he declined to specifically comment on the alleged irregularities committed here or the lawsuits filed by local customers, saying the issues are still “pending.”

The prosecution confiscated 956 vehicles from AVK from its pre-delivery inspection center in Pyeongtaek, some 70 kilometers south of Seoul, in June, saying some of them were imported without proper environmental protection authorization.

Johannes Thammer, who has led AVK since late 2012, was charged with violating the Clean Air Conservation Act to win sales approval from local authorities.

One of Volkswagen’s local executives, who is in charge of the vehicle certification process, was first indicted in July and was sentenced to a year and a half in jail by a local court earlier this month.