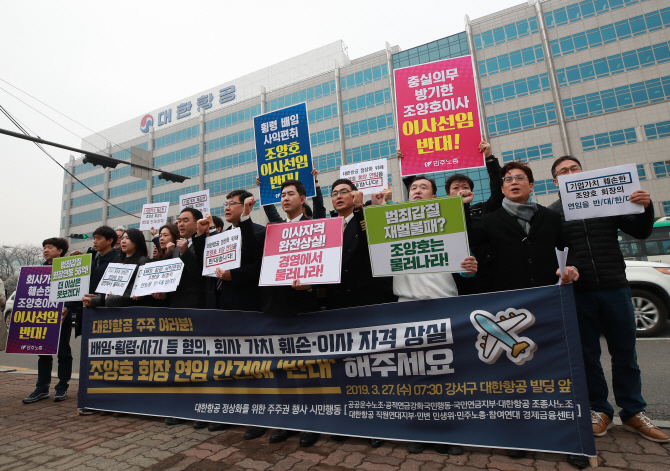 Corporate activists call for the ouster of Korean Air chief Cho Yang-ho from the airline’s board of directors. (Yonhap)

Shareholders of the national flag carrier voted against an extension of Cho’s tenure as representative director in a landmark vote. The move represents the first time that a founding family member of one of South Korea’s leading conglomerates has been booted out of a decision-making board through a vote by stakeholders.

“The outcome of the shareholder’s decision is a very symbolic milestone in the history of corporate Korea. There is a good chance that family-run conglomerates will behave much more carefully than in the past,” Park Ju-min, chief executive of market research firm CEO Score, said.

He cautioned, however, that some activist funds represented by Elliott Management will be emboldened and move to increase their influence and say in local businesses to serve their own interests.

Chairman and Chief Executive Cho, who remains the top shareholder of the Korean flag carrier, should also be closely watched as he may exert influence behind the scenes regarding key management decisions, Park said.

The Cho family and those with special relations with Korean Air collectively own a 33.35 percent stake in the full-service airline.

The National Pension Service, the second-biggest shareholder in Korean Air with a stake of 12.56 percent, cast a vote against the reappointment.

Proxy advisers such as International Shareholder Services (ISS), Sustinvest and the Center for Good Corporate Governance also recommended that investors reject the re-election of Cho, who is on trial on charges of embezzlement and breach of trust.

ISS cited “sufficient evidence of egregious governance concerns and material failure of fiduciary duty” at Korean Air to warrant its stance. Foreigners own a 20.5 percent stake in the airline.

Besides the chairman, Cho’s wife and his two daughters have all been under public criticism for their misbehavior.

Cho’s eldest daughter Hyun-ah made international headlines in 2014 when she ordered the Korean Air plane she was aboard to return to its gate at a New York airport after losing her temper over the way she was served nuts.

Cho’s youngest daughter Hyun-min took flak for allegedly throwing a glass of water during a business meeting with a partner firm. They both resigned from their senior positions at the airline due to the scandals. 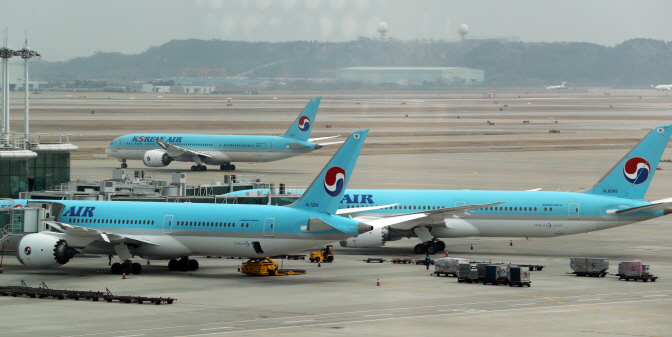 Korean Air saw its image fall to the bottom of the pile and posted poor earnings results last year. In 2018, it shifted to a net loss of 167.6 billion won (US$147.5 million) from a net profit of 801.9 billion won a year earlier.

“The shareholders’ decision sends a warning to other family-controlled businesses by making clear that their positions are not bulletproof and that they can be forced to step down if they seriously hurt the value of companies and shareholders,” Sustinvest CEO Ryu Young-jae said.

Choi Jong-ku, chairman of the Financial Service Commission, said Cho’s removal from the board shows the “positive side of the stewardship code” adopted by the NPS last year.

“Korean Air’s case will set a precedent for local conglomerates that they may lose control of them unless an advanced and transparent governance structure is guaranteed for shareholder value,” an executive for a local company said.

He speculated that the outcome would cause many companies and their owners to reassess their hold on management, with some taking measures to prevent themselves from being ousted.

Not all economic actors saw only the positive, with the Federation of Korean Industries expressing regret over the voting outcome. It argued that the NPS didn’t consider the chairman’s contribution to boosting shareholder value in its decision to reject his reappointment.

Korean Air’s management had echoed this view, saying that Cho’s extensive know-how and contacts are invaluable assets to the company.

The airline, meanwhile, said that while Cho has to vacate his seat, he will retain his post as chairman and that speculation that there will be any significant change in management is overstating the facts.