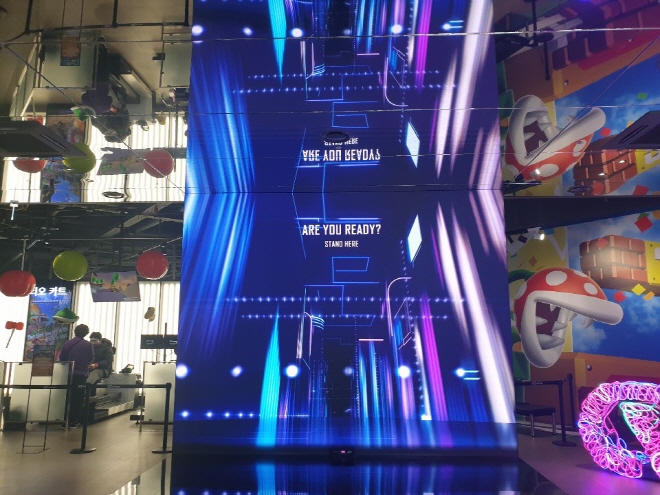 VR Station, South Korea’s largest VR theme park near Gangnam Station in Seoul, is shown in this photo taken on March 18, 2019. It is operated by Hyundai IT&E Co., the IT solution service unit of retail giant Hyundai Department Store. (Yonhap)

SEOUL, Mar. 22 (Korea Bizwire) — If you think virtual reality (VR) games are only for tech geeks who like cool gadgets and are attracted to giving free rein to their imaginations inside head-mounted displays (HMD), that’s not the case anymore.

VR games have been in the spotlight as one of the hottest entertainment trends in recent years, but they have largely remained a niche diversion due to the “high barriers” associated with accessibility and cost. For high-quality content, VR games need expensive gadgets, which can easily cost more than $1,000, and high-performing computers and other accessories.

While VR content and rides have been around in selective shopping malls and amusement parks, a growing number of new theme parks designed from the ground up with the newest tech in mind are embracing them and introducing very original virtual attractions. Many have sprung up in trendy areas of Seoul over the past year.

The entertainment stations are at their best when straddling the line between giving visitors experiences they can’t get in their homes and not causing them to become overly nauseous, while at the same time staying clear of low-quality content and headsets that just don’t appeal to users who have grown accustomed to impressive video graphics and top-notch audio experiences.

Such a balance can draw tech-savvy youngsters and ordinary people into the new entertainment arena.

In late November, Hyundai IT&E Co., the IT solution service unit of retail giant Hyundai Department Store, opened the nation’s largest VR gaming center near the bustling Gangnam Station, one of the most expensive retail strips in the capital city.

Bandai Namco Entertainment is a developer and publisher of several global hit video games, such as “Mario Kart” and “Dragon Ball Z.”

Visitors can get everything from cart riding and first-person shooter games to fishing, aerial biking, surfing and flight games.

The indoor station has increasingly emerged as one of the hot spots for new indoor entertainment, especially when heavy fine dust concentrations force people to shun outdoor activities.

“I wanted to go out to have some fun but just don’t have enough time to go to amusement parks on the outskirts of the city,” Kim Sian, a 23-year-old Seoul resident, said while standing in line for a cart riding game with two of her friends. “I think a VR theme park is a good option that offers thrills and stimulates me to move.”

The content is actually offline multiplayer games, and players can talk directly with each other through a microphone on the headset, making it possible to collaborate as a team.

“It’s a different kind of experience than playing a video game at home or watching a movie in a theater,” Kim said. “Without actually riding a roller coaster, I felt an adrenaline rush and had a thrilling experience in the virtual reality world. I also felt like I became a character in the game world.” 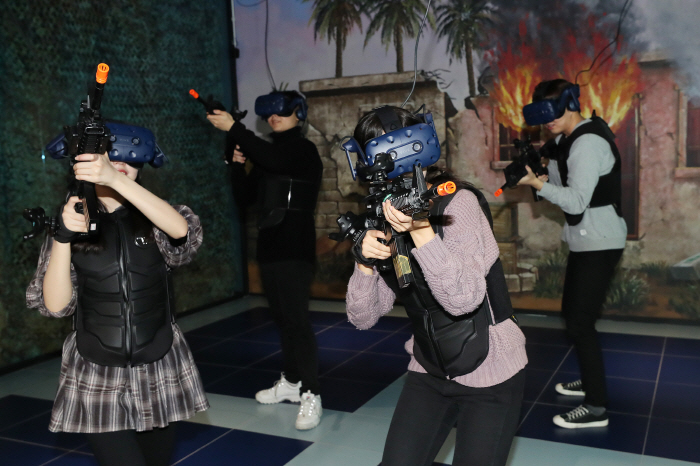 Industry officials say the new gaming technology is creating exciting new avenues for people to play games with friends, noting that impressive innovations in content development and devices are making games more fun and accessible to everyone.

“Those in their 20s and 30s who like to catch up with the latest trends and families with kids are our main customers,” Lee Sun-young, a marketing official at Hyundai IT&E, said. “As multiplayer and competition type games account for most of VR Station’s attractions, group customers, such as couples, friends and families, visit here a lot.”

Starting with the first franchise, Hyundai IT&E said it plans to open over 10 VR Stations by 2020 in urban areas.

Local telecom companies are also paying keen attention to the potential of VR theme parks as a great medium that can really stretch the boundaries of indoor activities for urban dwellers.

South Korean telecom giant KT Corp. said it has been seeking to expand its VR business to provide differentiated content in the runup to the launch of its commercial 5G service.

As part of its efforts, KT joined hands with GS Retail Co., the nation’s major convenience store chain operator, to open two VR theme parks in Seoul last year, the first in Sinchon and the second near Konkuk University. 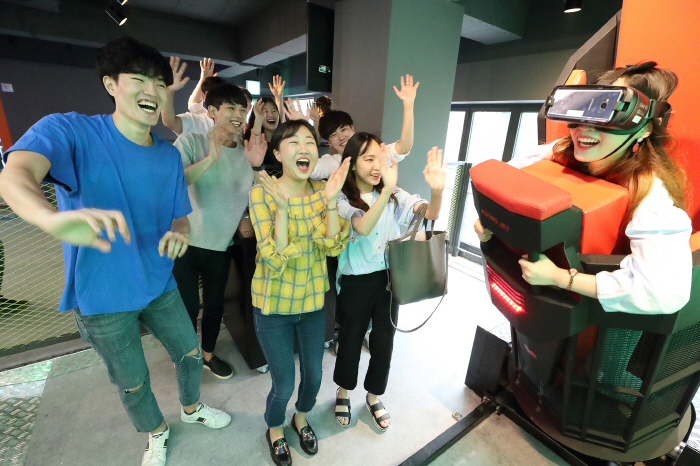 In October, KT also signed a memorandum of understanding with Malaysia’s Iskandar Innovations Sdn Bhd (IISB) to set up a VR center in the South Asian nation’s southern state of Johor, famous for the international theme park Legoland.

Hoping to ride on the latest trend, KT set a goal to raise annual revenue of 100 billion won (US$88.6 million) for its VR business by 2020, when the country’s immersive media market is expected to hit 1 trillion won.

“The VR entertainment market is expected to expand thanks to commercial 5G service, innovations in HMDs and content development,” Kwak Min-kyu, a senior manager at KT’s new media business center, said. “As developers are working on various content, VR games will be good enough to go truly mainstream in the future.”