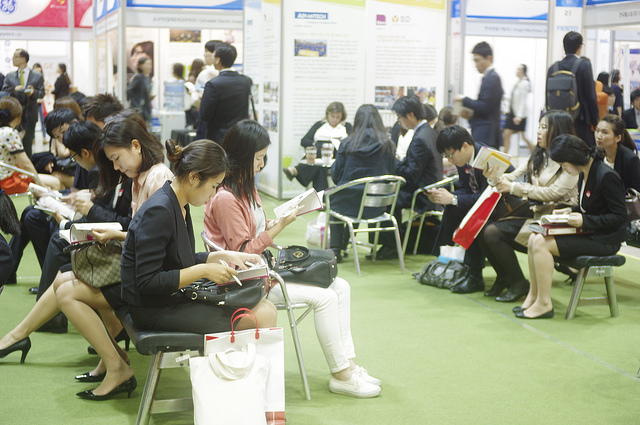 The wage peak system is a job-sharing measure that aims to provide job security for older employees through a gradual wage reduction after a certain age. (image: hwayoung@serblog.kr/flickr)

Speaking to reporters in Washington, Finance Minister Choi Kyung-hwan, said while the tripartite government-labor-management dialogue platform broke down earlier this month over disagreements on key issues like easing the country’s “dual labor market” structure, the government is committed to implementing changes.

“Programs that can move forward will be pursued, even if there was no consensus reached,” the official, who is in Washington to attend the G-20 ministerial meeting, said.

He pointed out that on average 500,000 young people are entering the job market every year, but there are only 200,000 regular positions available at present.

“Because dealing with youth unemployment is a critical issue, the government will devise fiscal spending plans, while also asking the private sector to take pro-active measures,” he said.

Choi, who doubles as deputy prime minister in charge of economic affairs, vowed that the government will do its part to make certain that companies are not hurt by measures if they opt to hire young people.

The wage peak system is a job-sharing measure that aims to provide job security for older employees through a gradual wage reduction after a certain age. The money saved can then be used to hire more young people.

Parties at the tripartite talks exchanged views on freezing the wages of top wage earners, which can lay the foundation for creating some 800,000 new jobs for young people.

On growth, the policymaker said South Korea has entered a period where mid-3 percent growth should be viewed as being good.

“People should accept the fact that the rapid growth witnessed in the past will never happen in the future,” he argued.

The finance ministry has set the country’s growth rate for 2015 at 3.8 percent, which is viewed by many as being too optimistic.

On the other hand, he stressed that only by trying to push for reform can growth be nudged up, even just a little bit.

In regards to speculations that South Korea will have to mark up interest rates if the United States takes steps to prevent the outflow of capital, Choi stressed that the two countries were facing different conditions.

He said the U.S. is leading global economic growth at present, while South Korea’s economy is not doing as well, so any action taken should take into account this difference. He said South Korea could move to raise rates, but it does not necessarily have to.

Speaking on Seoul’s membership into the China-led Asian Infrastructure Investment Bank (AIIB), the official said a deputy minister level official has been set to represent the country’s interests at the upcoming negotiations set to take place early next week in Beijing.

He pointed out that China has vowed to ensure that the writing of the AIIB’s Articles of Agreement will be undertaken in a transparent manner in line with global standards.