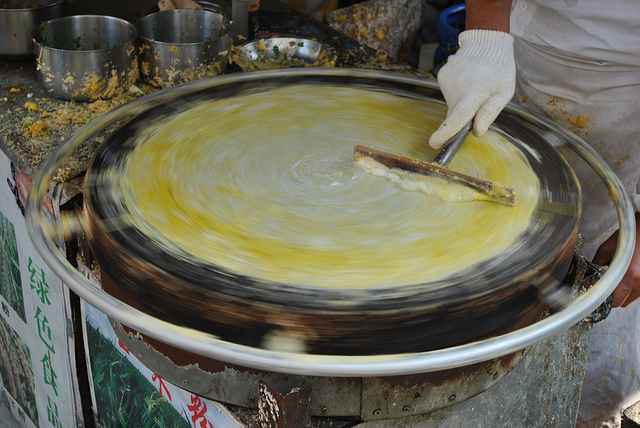 With 3D printing technology, they can make one jianbing or Chinese pan cake in just two minutes, and using software, they can make various shapes of jianbing like Iron Man or Hello Kitty. (image: Tom Mascardo/flickr)

SEOUL, Sept. 18 (Korea Bizwire) – Graduates of a prestigious university in China are making headlines by producing jianbing, one of the most famous street foods in China, using 3D printers.

According to The Beijing News, the elites from Tsinghua University set up a jianbing manufacturing company that uses 3D printing technologies. Shi Kanyue and Wu Yili are the two founders of the company, Peter Pan Science Technologies, and were classmates at the university in 2003.

After graduation, they went their separate ways. Wu joined a software company and earned one million yuan a year, but later quit his job and began running four jianbing chain stores. Shi went to France to study 3D printing, and set up a 3D printer development company with 13 other graduates from Tsinghua.

The two accidentally came together last June, and set up the jianbing company with 3D printers.

With 3D printing technology, they can make one jianbing or Chinese pan cake in just two minutes, and using software, they can make various shapes of jianbing like Iron Man or Hello Kitty. In addition, while one person can only make up to three cakes at a time, a 3D jianbing printer can produce up to 20 pan cakes simultaneously.

As three Tsinghua graduates were already working for Wu’s existing company, a total of 16 graduates from the university are now working at the combined company. Among the workers are former Google employees, while others worked in the United States after their studies at high-paying jobs.

They are hoping to expand the company by developing good quality food using new ideas and technology, and seek even higher salaries.

Tsinghua University is one of the two most prestigious higher-education institutions in China along with the University of Beijing, and many leaders including President Xi Jinping graduated from the university.

In China, with full support from the government, members of the young generation with fresh ideas are actively setting up their own businesses.