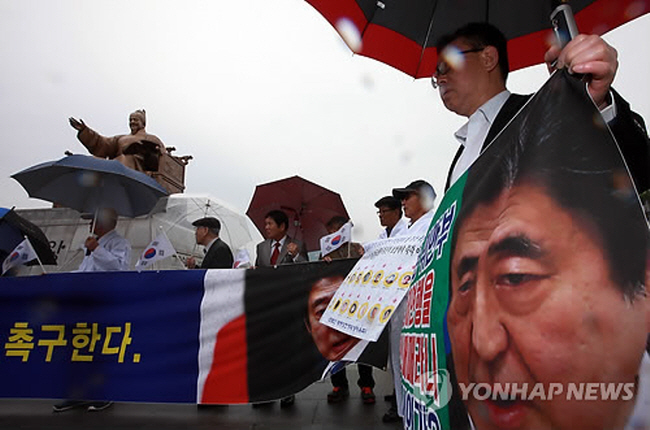 Family members of the Koreans who were forced to carry out dangerous tasks for Japanese companies during the war protested Abe’s upcoming speech. (image: Yonhap)

SEOUL, Apr. 29 (Korea Bizwire) — A group of victims of Japan’s war crimes blasted the United States Wednesday for inviting Japanese Prime Minister Shinzo Abe to address its Congress despite his refusal to apologize for his country’s past wrongdoing.

Korean women who were forced into sexual slavery during World War II called the invitation “unbelievable,” as South Korea marks the 70th anniversary of its independence from Japan’s 1910-45 rule.

“The U.S. Congress basically cleared Abe from blame,” the Korean Council for the Women Drafted for Military Sexual Slavery by Japan said at a weekly demonstration in front of the Japanese Embassy here.

More than 150 protesters joined to call on Abe to offer a clear apology.

Historians say more than 200,000 women, mainly from Korea, were forced to work in front-line brothels for Japan’s World War II soldiers. Japan, however, has long tried to water down the atrocity.

Family members of the Koreans who were forced to carry out dangerous tasks for Japanese companies during the war also protested Abe’s upcoming speech.

“We cannot but deplore (Abe’s speech at the U.S. Congress),” the Association for the Pacific War Victims said at a press conference in downtown Seoul. “The U.S. government must stop Japan from downplaying its past wartime atrocities.”

Millions of Koreans are estimated to have worked for Japanese companies in severe conditions, which often led to death.

Kim Jong-man, a former forced laborer, and Yang Soon-im, head of the association, delivered a letter to the U.S. Embassy in Seoul, asking for U.S. solidarity.

“I am deeply pained to think about the comfort women who experienced immeasurable pain and suffering as a result of victimization due to human trafficking,” Abe said, using a euphemistic term for sex slaves.

“Deeply pained,” is one expression Abe has used in order not to mention “apology” when it comes to the issue of sexual slavery.