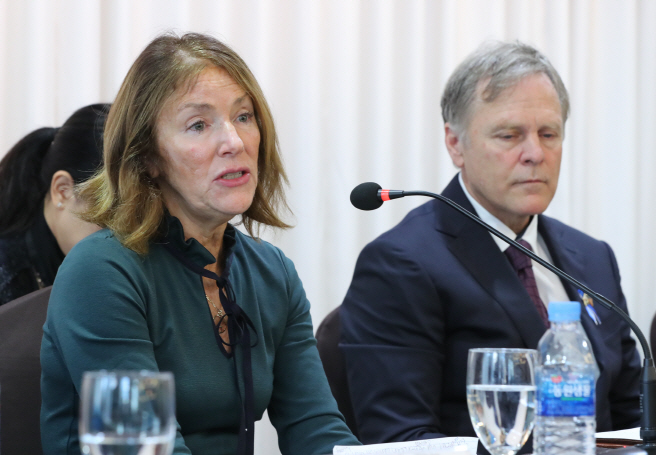 Cindy Warmbier (L), mother of American student Otto Warmbier, who died soon after being released by North Korea, speaks during a press conference in Seoul on Nov. 22, 2019. Next to her is Fred Warmbier, father of Otto. (Yonhap)

SEOUL, Nov. 22 (Korea Bizwire) — The parents of American student Otto Warmbier, who died soon after his release from 17 months of captivity in North Korea, called on South Korea’s government Friday to pressure North Korea on its human rights abuses.

Fred and Cindy Warmbier made the appeal during a press conference in Seoul organized by the Korean War Abductees’ Family Union (KWAFU) to drum up international support for legal responses by victims of North Korea’s abductions and detention, and their families.

Warmbier was held captive in the North for 17 months after being sentenced to 15 years of hard labor for allegedly stealing a propaganda poster from his hotel during a trip to Pyongyang in 2016.

The North has denied any responsibility for his death.

“We get tremendous support from our government, from President Trump, and what’s discouraging is to be in South Korea and just to interact with KWAFU, and they don’t get support from the Moon administration, and that’s a real problem and that needs to be changed,” Fred Warmbier said.

Cindy Warmbier stressed that it’s not “acceptable” to leave behind the human rights issue just by saying there are denuclearization negotiations going on.

“That’s like saying it’s OK to murder people as long as you don’t murder us,” Cindy Warmbier said.

North Korea has long been labeled one of the world’s worst human rights violators.

The communist regime does not tolerate dissent, holds hundreds of thousands of people in political prison camps and tightly controls the flow of outside information.

The Warmbiers are trying to discover and recover North Korean assets around the world to hold them accountable for violating international sanctions.

“If you force North Korea to engage the world from a legal stand point, they will ultimately have to have dialogue,” Fred Warmbier said. “Cindy and my mission would be to hold North Korea responsible.”

They plan to visit the Demilitarized Zone (DMZ) separating the two Koreas on Saturday and return home the next day.

The union had asked President Moon Jae-in to meet Warmbier’s parents at the conference venue, but the presidential office turned down the request, citing Moon’s busy schedule.