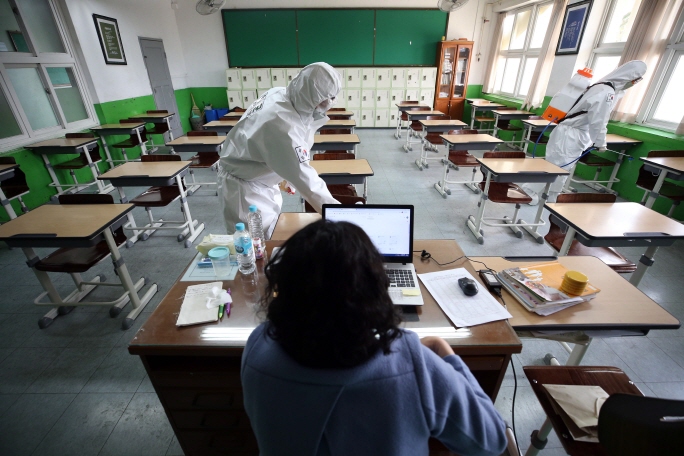 This photo, taken on April 16, 2020, shows a teacher running an online class in an empty classroom in the southern city of Daegu as soldiers clean it with disinfectants. (Yonhap)

SEOUL, May 7 (Korea Bizwire) — While preparations to reopen schools this month are underway, worried parents are demanding the plan to be further postponed due to lingering concerns over the coronavirus that has infected more than 10,000 here.

In an unprecedented move, elementary, middle and high schools, as well as kindergartens and childcare centers, have remained closed for the past few months as part of precautionary measures against the contagious virus.

All students — except for those enrolled in kindergartens and childcare centers — have instead been taking online classes since last month, with emergency childcare sessions provided to younger students whose parents are not able to look after them.

The government on Monday announced plans to reopen schools as daily new infections have fallen to single-digit figures over the past few days.

Under the phased plan, high school seniors will return to school on May 13, while students in all other grades will go back by June 1.

South Korea’s daily new infections, which hit a high of 909 on Feb. 29, have fallen to below 10 over the past few days, with most of the infections coming from imported cases.

Some parents have welcomed the announcement, hoping it will make up for a disruption to the academic schedule and a childcare vacuum for younger students, but some have raised concerns over how effectively quarantine measures will be carried out in classrooms. 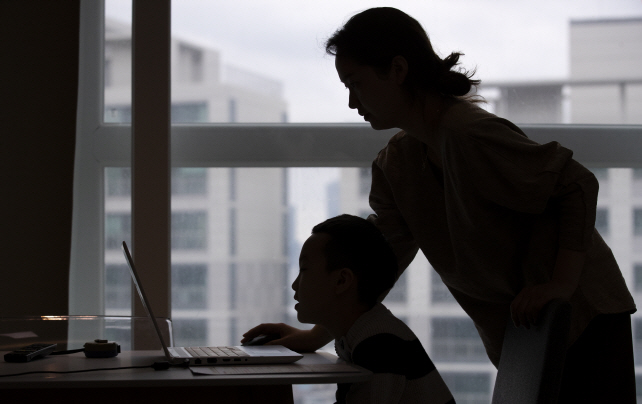 This April 20, 2020 photo shows an elementary school student taking online class with the help of his mother at their home in the central Seoul ward of Yongsan. (Yonhap)

As of Thursday, a search using the keywords ‘school opening’ and ‘going to school’ at an online petition site run by the presidential office shows nearly 30 separate petitions asking the government to reconsider the reopening dates.

Those who wrote the petitions are demanding the government postpone the school reopening or exclude days that children are absent from attendance records so that parents can choose between keeping their children at home or sending them to school.

“I oppose returning to school while COVID-19 risks are lingering but also believe that the government factored in economic and childcare issues to make the decision,” wrote the author of a May 4 petition that has collected more than 20,000 signatures.

Among those most worried about the reopening are parents of first and second graders at elementary school, who will return to school on May 20, earlier than grades 3 to 6.

The education ministry attributed its decision on the schedule to childcare burden, a learning gap among students who have guardians to help them and those who don’t, as well as difficulties in remote learning for lower grade students. 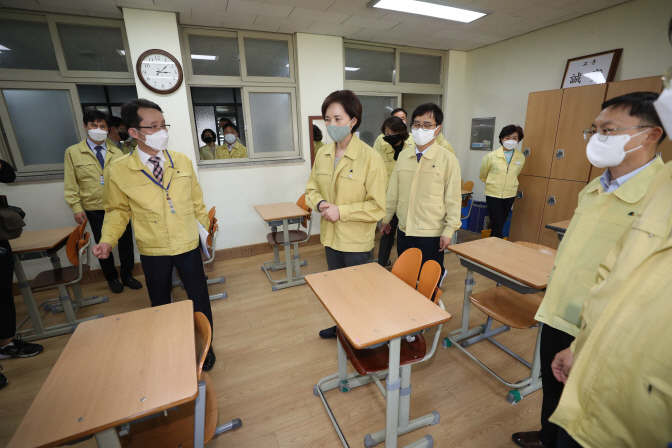 “Do you think routine quarantine is feasible for the lower grades? … They are children who can wear masks but will ask to not wear them once their friends start taking them off due to the warm weather,” wrote the author of a May 4 petition asking the government to reconsider May school reopening for lower graders.

“Is it really a decision you made after knowing what kids this age are like? … Our kids are precious beings. Please reconsider (the plan),” reads the petition that has received more than 14,000 signatures.

Some have also questioned the feasibility of not using air conditioners in classrooms after the government advised against using them due to possible infection risks.

The government initially appeared to rule out the idea of making school optional.

“We would have to discuss more about requests to make school optional even when there are no symptoms, but (I) don’t think it’s something that would have to be expanded,” Education Minister Yoo Eun-hae said in Monday’s press briefing.

The government, however, on Thursday released an updated guideline that exempts students with underlying diseases from attendance.

Students would also be allowed to study at home for up to about 20 days a year until the country’s disease alert level is lowered from the highest or second-highest level in the four-tier system.

South Korea has maintained the highest “red” alert since raising it on Feb. 23.

The guideline also includes mandating students to report their health conditions on a daily basis and keeping windows open when using air conditioners.

The government provides an official response on the online petitions when over 200,000 people have signed it within one month.