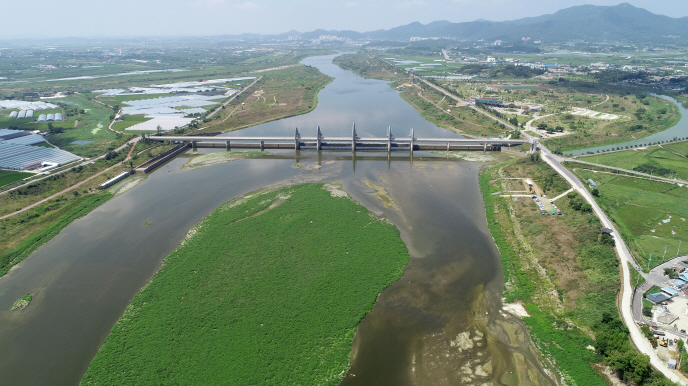 The landscape around the Seungchon Weir on the Yeongsan River in the southwestern city of Gwangju. (Yonhap)

SEOUL, Feb. 8 (Korea Bizwire) — Four major rivers in South Korea have shown marked improvement in water quality and ecosystems after the opening of some weirs built across the rivers under a controversial project of former President Lee Myung-bak, the government said Friday.

The Lee administration spent 22 trillion won (US$20 billion) from 2008-2012 on the Four Rivers Project to clean up the rivers and mitigate seasonal floods and droughts. But the project has been under constant criticism that the large weirs built across the rivers worsened water quality and spread harmful green tides.

The environment ministry opened 11 of the 16 weirs on the Geum, Nakdong, Yeongsan and Han rivers between June 2017 and December 2018. The 11 weirs comprise three on the Geum River, two on the Yeongsan River, five on the Nakdong River and one on the Han River.

During the reported period, the Geum and Yeongsan rivers, on which all floodgates were opened, saw their self-purification coefficient soar by 8 times and 9.8 times, respectively, showing the rivers’ ability to self-purify has risen.

As for the Seungchon Weir on the Yeongsan River, southwestern South Korea, the formation of hazardous green algae blooms, which suffocate fish, came to 221 cells per milliliter in the June-September period last year, sharply decreasing from the 1,535 cells per milliliter recorded in the same period on average.

According to the ministry, the opening of weirs also helped improve wildlife habitats, with the number of egret, a resident bird, on the Han River increasing 11.7 times from the number in May 2017.

The opening of the weirs also led to an improvement in the health of the ecological system of the rivers. The Sejong and Changnyeong Haman weirs saw the number of flowing water fish go up and the number of fish with a tolerance to pollution fall, it said.

The ministry also said the effect that the opening of the weirs had on decreasing hazardous green algae blooms was limited by a long-standing drought and high temperatures in the summer last year.