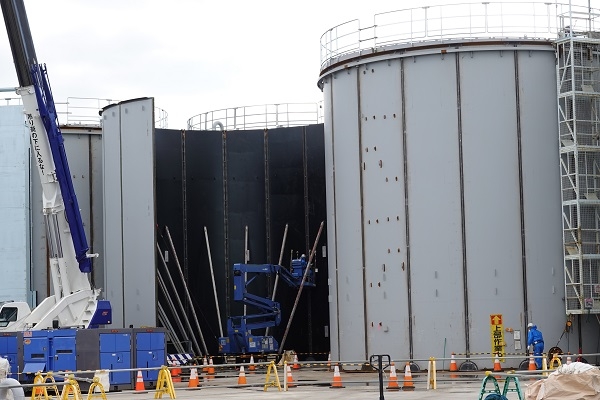 Seen in this photo provided by Japan’s Nuclear Safety Research Association on Nov. 18, 2019, is the construction of new water storage tanks at Fukushima No. 1 Nuclear Power Plant.

SEOUL, May 12 (Korea Bizwire) — The Navy plans to look into possible impact of radioactive contaminated water on its operations, officials said Tuesday, amid concerns over Japan’s planned release of radioactive water from the Fukushima nuclear power plant into the ocean.

Japan has been preparing to release contaminated water from the power plant devastated by an earthquake and tsunami in 2011 into the ocean.

More than 1.1 million tons of tainted water is reportedly in temporary storage at the Fukushima plant.

According to the notice of a bid posted on the government’s procurement system site, the Navy plans to commission research into potential impacts of radioactive water within operational areas on its maritime operations and ways to stably carry out missions.

“We’ve seen a growing possibility of contaminated water being released into our operational areas and we need to assess its impact on the health of our sailors and military hardware, among others,” a Navy official said.

It is the first time that the Navy has taken steps to look into the Fukushima case, though it did not specifically mention the Japan case in its plan to commission the research.

“The planned study is meant to devise detailed guidelines and response manuals in general terms,” the officer said.