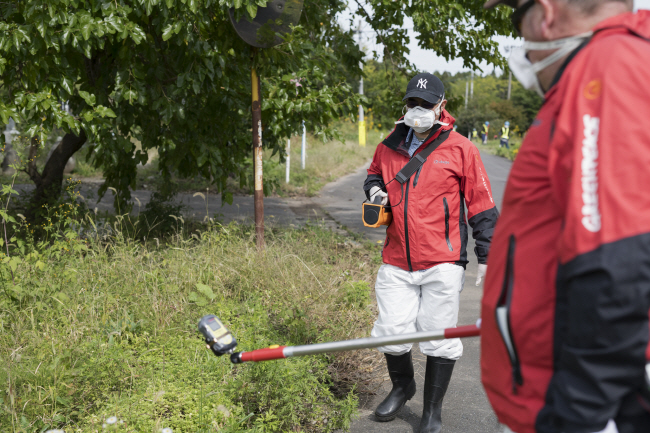 This photo, provided by Greenpeace, shows its members checking the level of radiation in Namie Machi in Japan’s Fukushima Prefecture on Oct. 21, 2019.

SEOUL, March 10 (Korea Bizwire) — A study by an international environmental organization has revealed that radioactive materials swept away by last year’s typhoon in Japan’s Fukushima Prefecture have spilled into decontaminated areas in the country.

In particular, the level of radiation near certain facilities set aside for 2020 Tokyo Olympics turned out to exceed pre-disaster levels of radiation in Fukushima by more than 1,700 times.

Greenpeace Japan held a press conference in Tokyo on Monday, announcing the results of an investigation of radiation levels in Fukushima between Oct. 16 and Nov. 5 last year.

The environmental organization reported that after Typhoon Hagibis hit Fukushima last October, a number of radiation ‘hotspots,’ where radiation levels are exceptionally higher than nearby areas, were identified.

“Leaves and twigs seem to have carried bits of mud that had been exposed to radiation to wider areas as they were blown away by strong showers,” said Greenpeace.

Radiation levels were particularly high near certain facilities set aside for use in the Tokyo Olympics. One of the radiation ‘hotspots’ was found near J Village, located 20 kilometers south of the Fukushima Daiichi Plant.

Radiation levels at the starting point of the Olympic Torch Relay were as high as 71 microsieverts.

The ‘baseline’ level of radiation throughout the whole Fukushima Prefecture in the pre-disaster era was 0.04 microsieverts, Greenpeace explained.

Simply put, the level of radiation in the hotspot near J Village was 1,775 times higher than the baseline level. “We cannot say there aren’t any risks,” Greenpeace said.

The organization explained that the risks may differ based on the radioactive substance, how long people have stayed in the area, and how the substances have been carried to other locations due to various weather conditions.

Another hotspot was found on the side of the road that passes by the Azuma Baseball Stadium. There were areas, however, where radiation levels dropped significantly.

“The sudden plunges in radiation levels can only be explained by heavy rain. It was too sudden to be seen as radioactive decay,” said Greenpeace.

Greenpeace said that the investigation was conducted in areas where the decontamination process has more or less been completed, with the exception of certain residential areas, concluding that heavy rain seems to have moved the radioactive substances that had originally accumulated in the forest.