SEOUL, Jan. 29 (Korea Bizwire) – Samsung Electronics Co., the world’s top smartphone maker, said Thursday its net profit fell 26.7 percent in the fourth quarter of 2014 from a year earlier, dampened by sluggish smartphone sales as its global rivals increased their shares in both the high- and low-end markets.

Net income came to 5.35 trillion won (US$4.93 billion) in the October-December period, compared with 7.3 trillion won the previous year, the company said in a regulatory filing.Operating profit dipped 36.4 percent on-year to 5.29 trillion won, in line with the earnings guidance released early this month. Sales slid 11 percent to 52.7 trillion won over the cited period.

For all of 2014, the tech giant booked a net profit of 23.4 trillion won, down 23.2 percent from a year ago. The operating profit fell 32 percent to 25.0 trillion won last year, confirming the weakest performance in three years since it logged 15.6 trillion won in operating income for 2011.

Samsung Electronics had indicated in the third quarter of last year that it would raise the dividend for shareholders.

Profit from the mobile business, the company’s cash cow, plunged 64 percent to 1.96 trillion won in the fourth quarter, compared with 5.47 trillion won a year earlier. 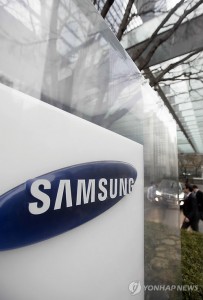 Samsung Electronics has been losing its edge to Chinese upstarts, including now the world’s third-largest Xiaomi Inc., in the low-end market as these new firms have gained a greater share by cranking out cheaper handsets.

The Korean tech firm is also facing challenges from its rival Apple Inc. in the premium market, as the U.S. firm has picked up sales with its latest iPhone 6 lineup that touts a bigger screen size.

Apple on Tuesday (U.S. time) posted a record high quarterly net income of $18 billion in the quarter ending in December, selling 74.5 million units of handsets, up 46 percent from a year ago.

Analysts here predict Apple has likely caught up with Samsung in smartphone shipments, as Samsung is expected to have sold 76 million units of smartphones in the fourth quarter.

In contrast, Samsung’s display and memory chip segment fared better on firm demand for LCD, OLED panels and DRAM, with the operating profit jumping 46 percent on-year to 3.13 trillion won in the fourth quarter.

Samsung Electronics said in an emailed statement that its System LSI sector, which involves making application processors for mobile devices and foundry businesses, will be a driver for growth in 2015, as the company is ready to ramp up production of the 14-nano FinFET technology, a 3-dimensional chip used in mobile devices.

Shares of Samsung Electronics were trading up 0.6 percent at 1,386,000 won on the main bourse at 10:05 a.m. on Thursday. The results came before the stock market opened.(Yonhap)
Tweet