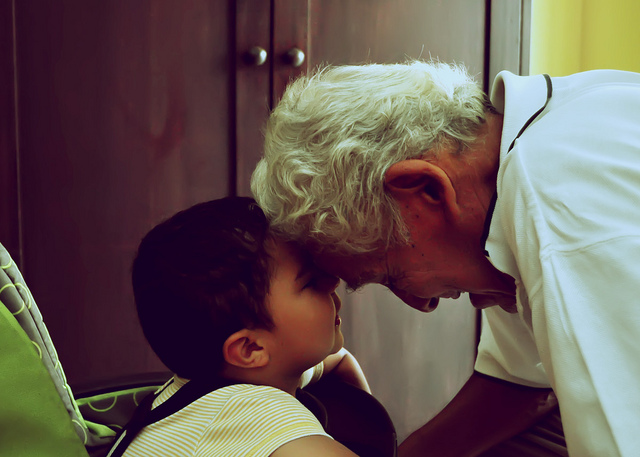 For grandfathers and grandmothers who are supposed to enjoy their lives after raising their children to adulthood, they are busy doing the same all over again with grandchildren.(image:BebopDesigner/flickr)

SEOUL, Korea, April 16, 2014 (Korea Bizwire) – Today there are as many 5.1 million dual-income households in Korea. Although some of them take their children to daycare centers nearby for a fee, still the majority of them rely on the care of their parents who are typically in their 60s and 70s.

For grandfathers and grandmothers who are supposed to enjoy their lives after raising their children to adulthood, they are busy doing the same all over again with grandchildren.

Even the National Institute of the Korean Language recently added a new word “grand-childrenitis” in its lexicon of neologisms. Indeed, the average work hours of the grandparents caring for babies and kids are 47 hours a week.

Even young parents in their 20s and 30s have problem caring for children and old people are more so, particularly vulnerable in their back, limbs, and cardiovascular system. Sometimes, they suffer from psychological maladies such as depression.

In addition, the grandparents have frequent disputes with their sons(-in-law) and daughters(-in-law) over the way they raise children. For example, some daughters or daughters-in-law insist on feeding the child in strictly regimented intervals or organic foods only. Whenever the child gets injured, the grandparents become the target of blame.

To all these possible causes of domestic dispute, lawyers advise that grandparents must take a step back and let the parents take primary responsibility in childcare. Eom Gyeong-cheon, attorney at law with Family Law Gajok, said, “The grandparents should play a secondary, complementary role in childcare, with parents taking full responsibility. In cases where grandparents and parents differ in their way to raise children, the child may be confused and the rules set by the parents may be easily compromised.”

“Grandparents need to acknowledge that the time has changed and accept the value and practice of their children while the children must respect their parents’ attitude coming from years of experience. That’s how one can reduce domestic dispute,” he added.