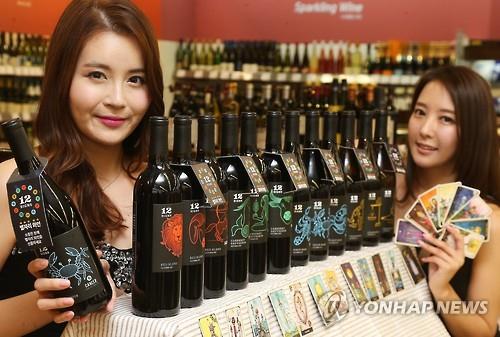 Wine imports rose 5.5 percent on-year to US$94.43 million in the January-June period, taking up the highest share of the total alcoholic drink imports at 24.9 percent. (image: Yonhap)

SEOUL, Aug. 5 (Korea Bizwire) — Wine was atop the list of South Korea’s alcoholic beverage imports in the first half of this year, outpacing hard liquors for the first time, data showed Wednesday.

Wine imports rose 5.5 percent on-year to US$94.43 million in the January-June period, taking up the highest share of the total alcoholic drink imports at 24.9 percent, according to the data compiled by the Korea International Trade Association (KITA).

It marks the sixth consecutive year that first-half wine imports have increased from a year earlier.

By country of origin, wine imports from France took up the largest share at $27.12 million, followed by Chilean wine with $21.48 million, the KITA data showed.

Imports of whisky and brandy, which had been the most popular imported alcoholic drinks in the country, fell to second place with $91.73 million, or 24.1 percent of the total.

Industry watchers attributed the rising popularity of wine to a shift in the social atmosphere in which more people are turning to healthier alternatives as opposed to hard liquors.

The data also showed imports of foreign-made beer zooming 18.6 percent on-year to $62.1 million in the first half, with inbound shipments rising 10 to 30 percent annually for the last six years.

Exports of South Korean alcoholic beverages, on the other hand, fell 4.7 percent on-year to $192.21 million in the January-June period, according to the data.