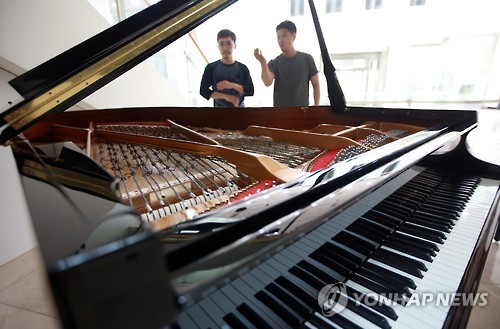 ‘The Piano of Unification’ will be exhibited in the lobby of the Seoul Museum of Art, as a part of the ‘North Korea Project’ Exhibition. (image: Yonhap)

Seoul, July 20 (Korea Bizwire) – The Ministry of Unification and Jeil Worldwide have announced the launch of a project called ‘The Piano of Unification’ to draw interest to the topic of unification, and celebrate the 70th anniversary of Korean independence.

‘The Piano of Unification’ project will feature a piano made from the barbed-wire fence dividing North and South Korea in various exhibits and performances. Seoul Museum of Art, the National Chorus and Samick Cultural Foundation are participating in the project.

‘Gong-myung’, a world music group famous for making creative instruments and playing them, will take part in making the piano. Over the past three months, Gong-myung musicians created a new instrument with wire fence pieces collected by frontline military units.

‘The Piano of Unification’ has a unique design and tone.

The luxurious exterior of the grand piano and the sharp wire that replaces the piano strings show a steep contrast.

Since the piano strings have been substituted by old and uneven pieces of the wire fence, the tone is closer to a percussion instrument, and does not sound much like a conventional piano.

‘The Piano of Unification’ will be exhibited in the lobby of the Seoul Museum of Art, as a part of the ‘North Korea Project’ Exhibition.

The museum plans to display articles that represent the division of Korea, and screen a video about the music played by ‘The Piano of Unification’, and how the piano was made.

On August 15, Independence Day, the piano will appear on stage during the ‘Choral Festival of the Korean People’, which will be held at the Seoul Arts Center’s concert hall, celebrating the 70th anniversary of independence in Korea.

Lee Sung-ha (Cheil Worldwide), who arranged the project, commented on the motivation behind his piano idea: “I was inspired to come up with this project when the Pope was presented with a crown of thorns made out of the wire fence dividing Korea. I thought that the wire fence could also represent peace as well as war and division.” He added, “I planned the project, starting from a small idea, wanting to add musical elements to the wire fence that could touch people’s hearts.”