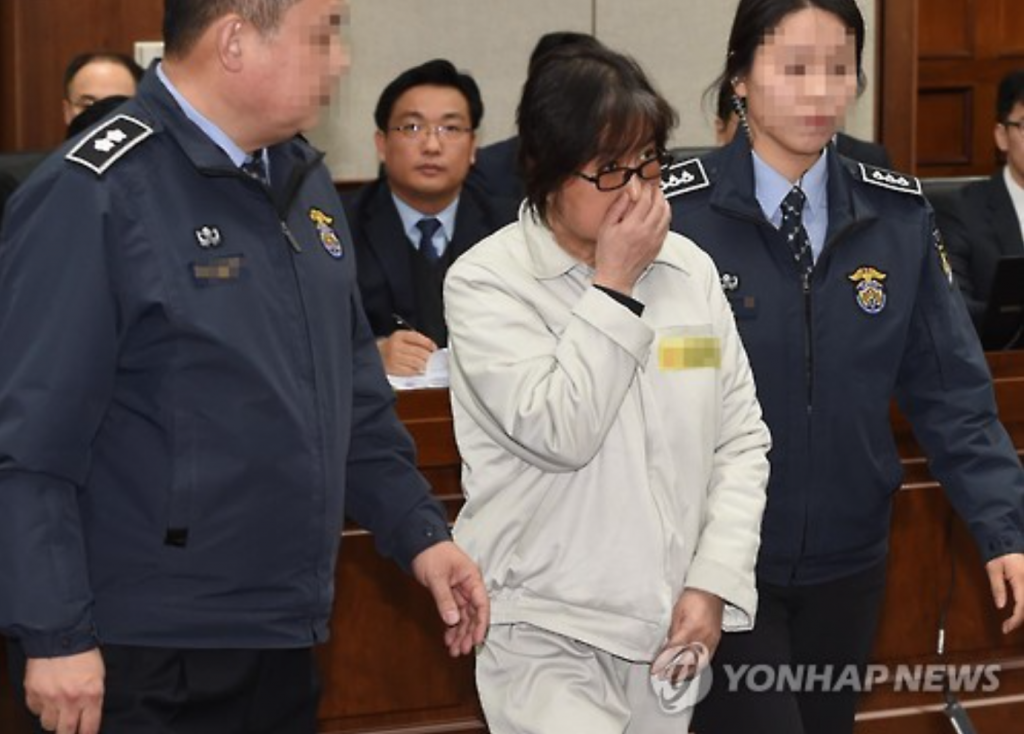 SEOUL, Jan. 5 (Korea Bizwire) – President Park Geun-hye’s close friend, who is at the center of an influence-peddling scandal that led to her impeachment, pleaded not guilty during her first formal hearing held Thursday.

Choi Soon-sil, 60, appeared before the Seoul Central District Court as a defendant for a string of charges, including abuse of power and attempted fraud, in the hearing held after two rounds of preparatory sessions last month.

“There are many parts that are unfair to me,” she said in court, denying all allegations against her.

Park’s former aides An Chong-bum and Jeong Ho-seong also attended the hearing on suspicions of collaborating with Choi, making their first public appearance since they were taken into detention late last year.

Choi and An are suspected of forcing conglomerates to donate 77.4 billion won (US$65.1 million) to Mir and K-Sports Foundations, which Choi virtually controlled. Jeong is accused of leaking government secrets to Choi.

State prosecutors have named President Park as an accomplice in the alleged irregularities, but Choi’s attorney Lee Kyung-jae denied any collaboration between Park and Choi.

An rejected all the charges, saying he will elaborate further while “sincerely going through the upcoming court proceedings.”

Jeong’s legal representative, meanwhile, did not clarify whether the defendant admitted to the charge of leaking information, saying they could not review the case due to the special prosecutors’ raid of his jail cell earlier this week.

On Tuesday, a team of prosecutors looking into the scandal raided detention centers in Seoul and Uiwang, south of the capital city, where Choi and other key suspects are incarcerated.

The team said the cells of Jeong, ex-Vice Culture and Sports Minister Kim Chong and Choi’s associate Cha Eun-taek were subject to the search and seizure.

Park was impeached by the National Assembly on Dec. 9 over her alleged involvement in a string of suspected crimes committed by her friend of more than 40 years.

On the same day, the Constitutional Court held the second hearing on Park’s impeachment, though she did not attend the trial. The law does not require her attendance and her lawyers have said she is unlikely to appear for future proceedings.

Park has denied all of the allegations against her, saying she only received simple advice from Choi and carried out her presidential duties faithfully.